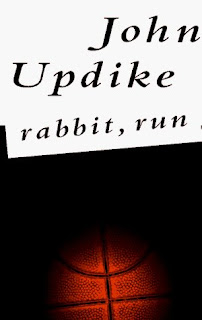 John Updike's book Rabbit, Run is the first official selection of the book club I started here at work. I call it the Brunch Book Club. There are five of in the book club and four made it to brunch that day. And the general consensus is that we ALL liked it! And none of us had read an Updike book before.


Keep in mind that this book was written in 1960...so things were a bit different back then.


The story revolves around Harry "Rabbit" Angstrom, a twenty-six-year-old. He was a big basketball star back in high school but now he is married, sells vegetable peelers, and has a second child on the way. And he's unhappy. But it doesn't come right out and tell you he's unhappy.


He's on his way home from work when he sees a bunch of kids playing basketball. He joins in and pretty much womps them. And he goes home and his wife is drinking and smoking (see...the differences between then and now?). And he's annoyed at her and that she's drinking. Oh, he's not annoyed because drinking is bad for the baby...no...it's because he's quit and she hasn't. So when he has to go pick up the car and she askes him to pick up a packet of cigarrets on his way home...he just leaves and doesn't come back.


At first he tries driving to Florida. But somehow that doesn't work. He ends up in a nearby town and hooks up with another lady and starts living with her. And he's really conceited. And it's all just a muddled mess.


And that's all I'm going to tell you. There is a part toward the end that is just shocking. Watch out because you might tear up on the subway, or miss your stop, or slack off responsibilities because you have to read it to the end then.


What we all agreed on is that the story just sucked us in. And Rabbit wasn't a very like-able character. But then again he wasn't supposed to be. We still all agreed that even we didn't know why we still cared about what was going to happen when really NONE of the characters were really like-able. But maybe that's the point. We get flawed characters because really none of us are perfect. And who doesn't know of a person like Rabbit.


I'm definitely going to read the other books in the series.


Have you read any of his Rabbit stories? What did you think?


Ok, as I was looking for other covers, I ran across this one. Wow! Slightly scandelous! And then I realized there was a movie made back in 1970. Hmm...has anyone seen it? What did you think? 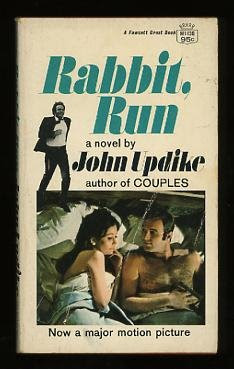