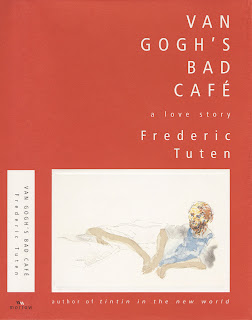 I don't remember where I first saw Van Gogh's Bad Cafe: A Love Story by Frederic Tuten. If you don't know, I LOVE all things Van Gogh. Always have. I've taken art history classes and while there are other artists and art works I adore...for some reason Van Gogh just holds a special place.

I finally decided it's about time I read this and had the library hold it for me. First of all, it's such a little book! I mean, it's about this size of my hand. I kind of liked that. Perfect subway reading size. And I loved that each chapter started off with a cool black and white sketch drawing. You can preview the first couple of chapters using Google Books here. But the novel itself???

I am pretty torn. I think I've decided that I liked it. But let me warn you...this isn't really all that accurate about Van Gogh. And it's a little fanciful. Ok. Very fanciful. But the writing...the writing is beautiful. So here we go:

The narrator starts the book in present day New York City. He's sitting outside somewhere on Avenue C, when a woman somehow magically steps through a wall. She's Ursula, Van Gogh's once upon a time paramour. She calls him Louis (we never really know his real name). So then the story flashes between present day Louis and Ursula and the past with Ursula and Van Gogh. And it's all written pretty poetically.

But it's a bit weird. The whole Ursula coming to modern times. And the narrator is clearly in love with her. But Ursula is really just a spoiled girl who's main love is morphine. Yes, there are a lot of drug references. And the story with Van Gogh takes place in time, after he's been sent to the Saint Remy asylum, after he had the ear incident, and is in France. But...in real life, Van Gogh met Ursula in England...way before he was in France. Hmmm. Not too accurate.

And it seems like instead of based in fact, the novel is based on the myth of Van Gogh. The whole depression, alcoholism, love affair, obssesion, ear mutilation, absinthe drinking viewpoint. Are all these things steeped in fact? Some of it. But this is an example:

"When night fell, he'd stick a candle on the brim of his hat and paint until the wax melted down to flickering stubs and the straw went up in flames, his hair and head along with it--a red-headed man on fire, lighting his palette with his fiery crown."

This is a famous portrayal of Van Gogh. Does anyone know if Van Gogh really did this or is this just a famous legend? I was under the impression that it's a bit of a legend.

So my thought on this book? I thought the writing was poetical and at times beautiful. But it seemed that this was mainly the author's love story...his love of the legend of Van Gogh. And Ursuala...well the character isn't factually represented so it's more a tribute to the type of women Van Gogh may have been in love with. So it's sort of a bittersweet novel to me. Very poetic but I guess inaccuracies and fancifulness was sometimes a bit distracting.

Has anyone else read this book? Or any other Van Gogh book?

Do you have any thoughts on the man or legend that is Van Gogh?

And now for Van Gogh's paintings of his "Bad Cafe" which is still around today: 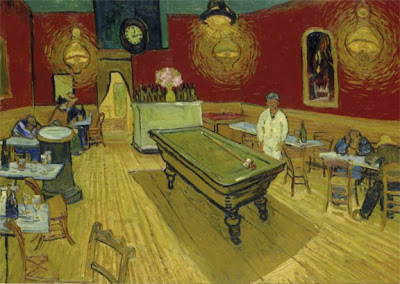 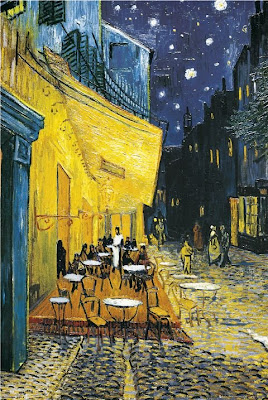 This has been a reading selection for the Art History Reading Challenge.