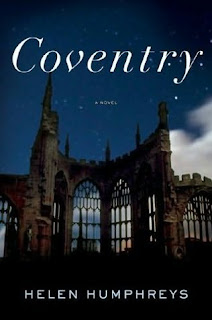 Coventry by Helen Humphreys is so far the only Library Thing Early Reviewer book I've won. It's a beautiful little hardcover book with a gorgeous cover of Coventry Cathedral in England. At only 192 pages, it reads more as long short story than a novel. While not the best World War II book I've read, it's a great story about the part one town, Coventry, played in the war.

The book centers around two women, Harriet and Maeve, who live in Coventry. They had previously met back in 1914, the day
Harriet's husband went off to fight in World War I. They meet again in 1940 during the German blitz on England. Coventry was hit very hard during the war. The entire town was pretty much demolished. When the two meet again in 1940, Harriet is still greiving for her husband who was killed in World War I. Maeve is struggling as a single mom.

And that's pretty much it. The book is sectioned into three parts: 1914 when the two meet, 1940 during the blitz, and later when the two reminice back on the war days. While not the best World War II book, I thought the sections about the blitz pretty much sucked me into the story. How people lived and survived during those times was pretty horrific and heroic at the same time.

I love the hardback cover version I have but here's an alternate cover: 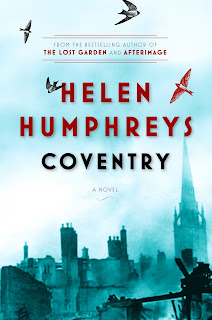 Also Reviewed By:
Age 30+...A Lifetime of Books and her Gram
Diary of an Eccentric
Literate Housewife
Historical Tapestry
at 1:49 PM