A while back after I bought my new camera, I snapped some photos at night in our park while walking the pups. I don't have a tripod yet so I had to be very still while shooting at night with no flash.

We are also really close to the Henry Hudson Bridge which connects Manhattan Island to the Bronx. Actually, it spans what used to be the Spuyten Duyvil Creek. There's a small portion of land across the river called Marble Hill that used to be connected to Manhattan Island. They diverted the creek for shipping purposes and Marble Hill is now part of the Bronx. Here's a fun little map from Wikipedia: 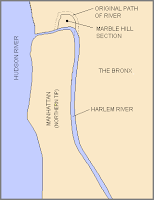 When we walk to the Bronx from our neighborhood (there's a Target, a Starbucks, an Applebee's, and other stores) we walk along the Broadway Bridge. Broadway, yes THE Broadway runs a long long way in New York State. In fact it runs all the way up to the state capital, Albany.

So here's the Henry Hudson Bridge. The lights underneath are the Spuyten Duyvil train stop for the Metro North Line: 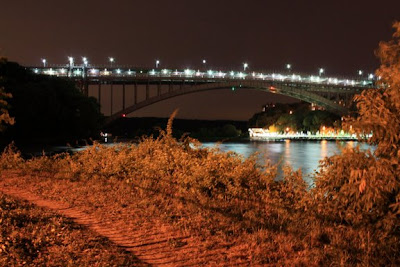 And here's some a view of the Bronx to the right. The bright lights underneath the building are the Marble Hill train stop of the Metro North Line. The bubble area to the right is part of Columbia University. Their two stadiums are behind these buildings. I'm not sure what sport goes on in the bubble building which only appears when it gets cold. The building you can see is the Columbia University's rowing house. Sometimes while I am walking the dogs in the morning, the rowing teams are out practicing. 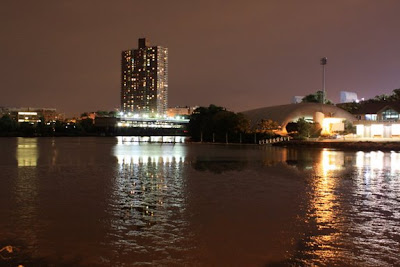