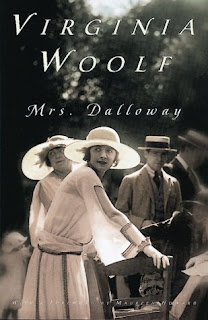 Let me warn you first that I've been in a weird reading funk this year. This is also my first foray into the works of Virginia Woolf, and while I didn't like Mrs. Dalloway, that doesn't mean I won't try again with a different work.

Mrs. Dalloway is the central figure of this story. The whole book takes place in a single day and starts off with Mrs. Clarissa Dalloway heading out to get some flowers for a party she is throwing that night.

It follows Mrs. Dalloway out into the city and there skips around in narration. The central figures are Clarissa and Peter Walsh (an old flame) who comes back from India and stops to see Clarissa. Other characters are Sally (a past best friend), Elizabeth (Clarissa's daughter), Richard (Clarissa's husband), and a few random park people. The story ends with Mrs. Dalloway's party.

Honestly, I loved the writing. Once I got used the rhythm I really enjoyed it. I was a little confused at the beginning because I had no clue how old Mrs. Dalloway was supposed to be. A bit into the book we find out she's 52 years old. But I guess I was thrown by the spunk of her character and the cover of the novel.

But halfway into the book I got bored. I lost interest in Clarissa, Peter, Richard, and the whole bunch. I really didn't care. The most interesting characters were Elizabeth, which we didn't hear much of, two very side characters of a ex-military man and his Italian wife, and a snippet of Clarissa's past friendship with Sally. Actually, had this book only been about those people, I'd have enjoyed it. I really just couldn't stand Clarissa or Peter.

In all honesty, I would never have finished this book besides the fact that I had signed up over at Sarah's blog for Woolf in Winter. That and I knew I'd never pick this book back up again...well at least not in the next couple of decades. I wonder if I'd like it more when I'm closer to Clarissa's age. Or maybe not. I guess I just felt that Clarissa and Peter just seemed so childish.

If you've read this and like it, or didn't, let me know what you thought! I'm off to read some reviews.

BookBath
What we have here is a failure to communicate (and more)
A Striped Armchair
Regular Rumination
It's all about me (time)
Books, the Universe, and Everything
Book-a-rama
Rhinoa's Ramblings