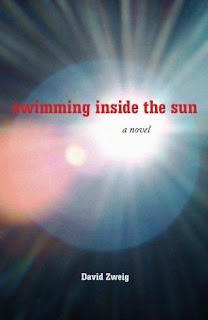 My husband and I are currently working on a duel review of a book called Swimming Inside the Sun by David Zweig. We thought it would be interesting to give a guy's and girl's perspective of this book. Does this sound interesting?

Here's the synopsis from the back of the book:

On the verge of success, struggling New York City musician Daniel Green has his life’s dream snatched from him. Despondent, Dan seeks solace and answers from the comforts of women, great thinkers from Marx to Kierkegaard, and the security of rice milk. Suffering from a darkly comical state of extreme self-consciousness, Dan begins to lose his grip on reality, and in a meta-fictional twist, the narrative shifts from first to third-person as his depersonalization peaks. All the while, the signs of his existential dilemma become, literally, the writing on the wall, as his studio apartment is increasingly taken over by The Notes he can’t seem to stop writing. Battling loneliness and a mind that can no longer discern between fiction and real life, Dan’s only hope may be the redemptive force of music. In a culture obsessed with tales of winners’ ascensions to the top, Dan Green’s story, defiantly, irreverently, is about what happens when you fail and the roads you take to figure out what next?