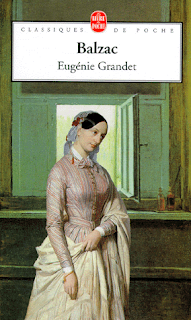 The last book I read in 2009 was a short novel by Honore de Balzac called Eugénie Grandet which was written in 1833. I needed a short novel to be my 100th book of 2009 and this Balzac novel is on the 1001 Books to Read Before You Die list, so I thought, why not.

The story takes place in a small town in France where Eugenie is the heroine. Her father was a cooper who has become wealthy but miserly. Think of him as a French Scrooge but with a wife and daughter. Terrifyingly horrid thought.

One day, Eugenie's cousin, Charles Grandet from Paris comes to town. He is a dandy, foppish, and cute. Eugenie falls hard. However, bad news follows in Charles' footsteps. His father has gone bankrupt and has taken his life. Charles must leave to earn his own way and try to earn money to gain back his family's reputation. Poor Eugenie is left to pine for his return.

I'm going to leave it there. I don't want to spoil the ending or what happens to these two star-crossed lovers. I thought it was amazingly realistically portrayed. I was trying to think what stands out in Balzac's writing and I think the word is "humanism." Beware that this is no ordinary simple love story. Things don't always go as plan or turn out right. But I just really felt for Eugenie and her evolution as a character.

Honore de Balzac wrote a collection 95 finished pieces of work (essays, novels, etc) of interlinking novels for a collection he called La Comédie humaine or The Human Comedy. It is divided up into sections and Eugenie Grandet fits into the section called Scenes from a Provincial Life.

I am absolutely fascinated by this massive undertaking of Balzac's and how his novels and works really dig deep into humanity with realistic characters. I'll definitely be reading more of Honore de Balzac's works.