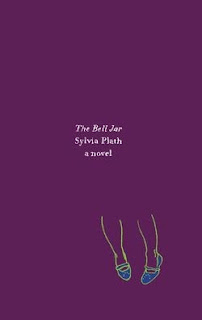 I stumbled upon a HarperPerennial blog a while back called The Olive Reader. If you recall, I mentioned that they are starting their own book club called English 101. You can check out my post on that here. Anyway, they asked if I wanted to review any of their books and I picked The Bell Jar, a classic novel by Sylvia Plath. I had read probably twenty pages back in high school or college but never finished it. I thought I'd give it another chance...that and the Olive Edition with the purple cover is just too cool.
The story starts out with Ester Greenwood, a young, fairly attractive woman, who is spending the summer interning in NYC at a magazine. I'm assuming the time frame is the early 1960s. Sounds fun, right? Not really. She comes across as kind of glum or complacent. While her friends are going out to parties and being fairly promiscuous, Ester is just kind of going along with the flow but not really a part of it. Actually, many of her experiences are pretty terrifying, including a weird almost-rape scene at a party. Oh, and she's also engaged to a sickly guy who she isn't particularly interested in.
Returning home, she applies to attend a school for writing but is turned down. What proceeds is her spiral into depression. Concerned, her mom makes her see a psychiatrist who gives her electric shock therapy. Yeah. Apparently her depression isn't a symptom of her environment but of faulty wiring in her brain. Obviously the treatment doesn't work well and she becomes suicidal and is institutionalized.
I'm going to leave the story there.
Before picking up the novel, I knew somewhat what the book was about. I kept thinking about the movie Girl, Interrupted. While this book sounds incredibly depressing, it actually wasn't. Well maybe just a bit. Instead, it just made me think. I thought about what makes people go crazy or depressed. How I don't think I would have been a very sane person during that time period. How society puts so much pressure on people then and now that it's amazing that more people don't lose it.
I also thought, just maybe, Ester wasn't that crazy. But then again, maybe she was. The story is through her perspective but I never felt that I really knew what she thought or felt. I couldn't quite grasp what her depression spiral stemmed from but maybe that's just me.
While it is an interesting and thought provoking novel, I think it's notoriety comes from being the only novel by Sylvia Plath. It was published in the early sixties under a pseudonym. Apparently the novel is semi-autobiographical and shortly after it was published, she committed suicide. So yeah, this novel stirred up some notice.
**Have you read this novel? What did you think? Have you read any other books similar to this, such as One Flew Over the Cuckoo's Nest or others?
Also Reviewed by:
The Roaring 20s
P.S.
I really like the Olive Edition's cover and particularly the spine of the book. Here's a picture: 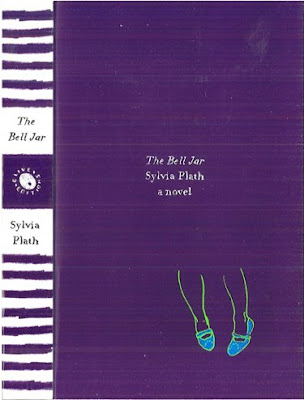 I also remember the first time I noticed The Bell Jar was in the 1999 movie 10 Things I Hate About You - Kat is reading the book at home on the couch.