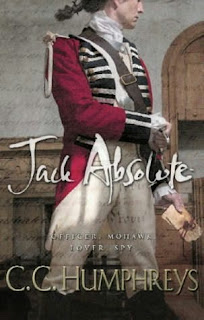 The other night my husband and I watched the movie, The Patriot on blue-ray DVD. He had never seen it before and was totally engrossed in the story. I love books and movies that take place during the American Revolution and even earlier during the French and Indian War. So when I saw C.C. Humphrey's book, Jack Absolute, at a library book sale, I had to snatch it. And I love the subtitle: Officer, Mohawk, Lover, Spy. O yeah.

Based on the character from Richard Sheridan's play from 1775 The Rivals, Jack Absolute is a soldier in the British army during the American Revolution. He had made a name for himself years earlier during the French and Indian War and has sort of adopted himself with the Mohawk people.

The story starts off in London where, to Jack's horror, his reputation as a lady's man is made infamous in Sheridan's play. Jack is then roped into a duel over a lady's honor and wrangled into joining the British army in America as they try to vanquish the rebels. During the voyage to America Jack finds a love interest, of course, and upon reaching America, is enlisted to uncover a spy in the King's army.

This was such a fun book. While there is a bit of comedy in the duel and Jack's reputation, not to mention the love story, what kept me interested was the setting and history. There are quite a few battle scenes, intrigues, spies, and twists in the plot making it very heavy on the history which is something I love in historical fiction. But there is a lot of humor and the scenes are so vivid. I think that's because C.C. Humphreys is an actor by trade and has, in the past, played the character of Jack Absolute in Sheridan's The Rivals, so he knows Jack's character very well and it shows.

Side note: My favorite side character is Ate, Jack's Mohawk friend/brother. He's always reading novels and quotes Hamlet all the time. I'd love to see his character more or maybe have a series all his own. I envision him as Uncas from The Last of the Mohicans, one of my all-time favorite movies.

This is the first book in the Jack Absolute series and I'm definitely going to be reading the rest.