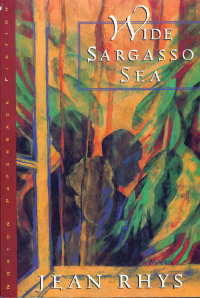 I decided to read Wide Sargasso Sea by Jean Rhys because of Twitter. Yes, that's right. Because of Twitter. I follow @WNBA_NRGM which is National Reading Group Month from the Woman's National Book Association. They mentioned this article from NPR. Confused yet?

I had no idea that this novel had anything to do with Jane Eyre [my review]. **If you've never read Jane Eyre and are planning to, you might want to stop reading here. **I happened to see it the other day at the library and picked it up. So here we go.

Wide Sargasso Sea imagines the background of "Bertha" the first wife of Rochester from Jane Eyre. It's supposed to clear up the mystery of why she ending up being the crazy lady in the attic.

And I say "supposed" because it didn't really clear up anything to me. At the end of the book, I still feel that "Bertha" a.k.a. Antoinette Cosway, the wealthy Creole girl from the Caribbean, is still such a mystery.

Let's be honest. I didn't really like this book. Classic literature it may be but here's why I had problems with it.

1) Rochester doesn't really seem like the Rochester from Jane Eyre. That said, if he's supposed to come off as an evil man who enslaves her in his attic....it kind of failed. You could see where he seemed just as stuck in having to marry her as she was to him. And there was no logical reason for him to start calling her "Bertha", it was out of character, and it just bugged me. (A large portion in the middle of the book is written from Rochester's perspective. I DID like that.)

2) The book jacket made it seem as if she had no choice in marrying him. As if against her will she was forced. But I didn't really see that in the book either. I couldn't really see WHY she had to marry him or why she did.

4) The characters were confusing, the writing was confusing...I'll just leave it at that.

1) The very beginning is very vivid. It's the part where Antoinette is a child, growing up as a Creole without a father, and the social changes that happen on the island where she lives. I'd tag this as "classic" just from that small section. Then the book just goes down-hill from there.

2) In a weird way, I could never get a picture of what Antoinette looked like. Maybe it was purposeful since Antoinette was caught between worlds, not fitting into either one. I thought that was a really powerful writing tool she used.

3) I did like the parallel between Jane's upbringing and Antoinette's. Lots of similarities.

4) Jean Rhys. I am kind of fascinated about the author herself. I'd love to read a book just on her.

***Has anyone else read this? Did you like it? If so, what was I missing? 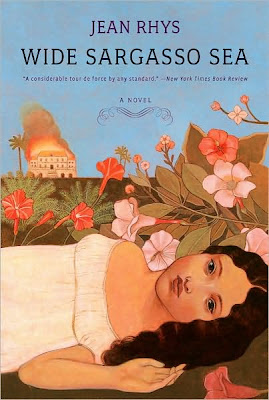