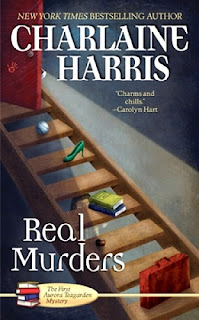 I found a paperback copy of Charlaine Harris' novel Real Murders in the freebie shelf in our apartment's basement. I haven't read her Sookie Stackhouse series yet but plan on giving it a go. But I thought this short mystery novel would be a great book to read for Dewey's 24 Hour Read-a-thon. And I was right!

This is the first book in the Aurora (Roe) Teagarden series. Instead of vampires, this series follows Roe, a librarian in Georgia with roundish glasses who is almost five feet tall. Cute, right?

Well, in this book, Roe is part of a group called the Real Murders club which meets to discuss various real life murderers...how they did it, why they did it, and all that controversial stuff. You know...Lizzie Borden, serial killers, etc.

All is going boring and predictable in Roe's life until one night at the Real Murders meeting, Roe finds the dead body of one of the members who's been murdered. And this murder replicates a famous past murder. Enter a serial killer in this tiny Atlanta suburb who seems to be focused on the various members of the Real Murders club.

Also, of course, Roe is in the middle of a love triangle. Should she date the handsome, short, muscular cop or the tall, red-headed mystery writer?

I thought it was a quick cute book. Although I will admit the ending was pretty surprising (did not see it coming) and it was pretty terrifying....I mean for a cute mystery book like this.

***I know the Sookie Stackhouse books are pretty popular right now, but has anyone read this series?

***If they made this a series, I see Christina Ricci as Roe...with round glasses.