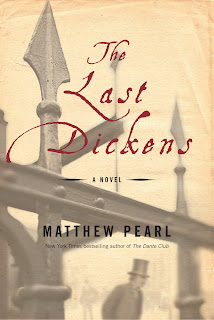 The Last Dickens by Matthew Pearl is another book I've been honored to review as part of TLC Book Tours. This is one of those books that is just right up my alley. It's got historical-fiction, mystery, murder, a literary celebrity, and just plain good characters. And don't worry if you've never read anything by Charles Dickens. After reading this, though, you may want to start.

The story starts off just after the death of Charles Dickens. His death has caused quite the stir, not just because of his popularity but because he left his latest novel, The Mystery of Edwin Drood, unfinished. Back then, many novels were published segments at a time as serials. So everyone knew that the title character, Edwin Drood, had been murdered by his uncle. But how did the story end? This was particularly aggravating to his London and American publishers.

It's left to one of the partners of Dickens' American publishers, James Osgood, to track down and see if Dickens left any notes or papers revealing how the story would end. They are racing against thieves and unsavory characters who will publish their own versions and who will even murder to get their hands on the valuable document.

I enjoyed this novel on so many different levels. First of all, this is a fun mystery adventure filled with thieves, creepy villains, opium dens...all that is great in a Dickens novel. James Osgood and his assistant Rebecca Sands are just an awesome hero/heroine duo. I loved the insight into the cut-throat publishing world of the 19th Century. I had no clue that the U.S. was such a breeding ground for unauthorized printing.

But my favorite aspect of this book was all that I learned about Charles Dickens. There is one segment that flashes back a few years to when Dickens did a whirl-wind American tour. I had no clue how huge of a celebrity he was back then. I mean HUGE. I really want to know more about him. And his story is one of those things where fact really is more crazy than fiction. For instance, he was in this huge train accident and miraculously survived, even helped to save other passengers. But the whole experience haunted him tremendously. Five years later, to the day, he passed away. And this is just ONE of the crazy things I learned about him.

So again, you don't have read any of Charles Dickens novels to enjoy this one. But it inspired me to read some. I'm in the middle of reading The Mystery of Edwin Drood right now and am really enjoying it. It's actually pretty humorous as well.

And now for the giveaway...

TLC Book Tours and Matthew Pearl are letting me give away TWO books. You must do two things: 1) Leave a comment telling me if you've read any novels by either Charles Dickens and/or Matthew Pearl. 2) Some way of contacting you (blog, email, etc).

Contest is open through Friday, October 23rd, and world-wide.

The cover above is the hardcover edition I own. The trade paperback just came out October 6th with this awesome cover: 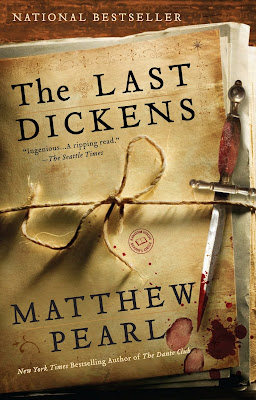 Here's another cover I found. I think the trade paperback is my favorite. 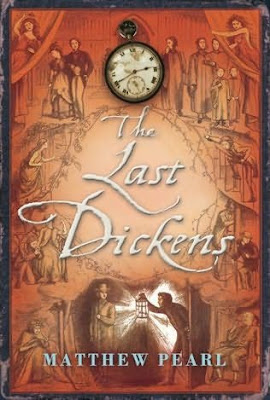