A Madness of Angels - Kate Griffin 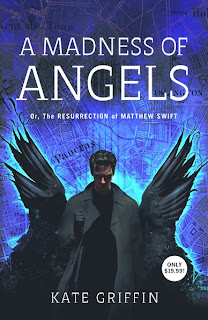 I first heard of Kate Griffin's new book, A Madness of Angels: Or, the Resurrection of Matthew Swift, on Pat's Fantasy Hotlist. And it just sounded awesome. So I thought it would be a fun pick for Carl's Once Upon a Time III Challenge. And for the most part it was.

Matthew Swift wakes up in London, naked and disoriented. The last thing he remembers is dying. It's been two years since he was brutally murdered.

Matthew Swift is no ordinary person. He's a sorcerer. And in the two years he's been gone, other sorcerers have disappeared or been killed. Who killed him and why? And who resurrected him?

And he's not alone in his body. He says "we" instead of "I" or "me". Who are these "we' who call themselves the blue electric angels?

I love this quote at the beginning of the book which is a running theme. And it seriously sticks with you:

We be light, we be life, we be fire! We sing electric flame, we rumble underground wind, we dance heaven! Come be we and be free! We be blue electric angels. -Anonymous spam mail, source unknown
What ensues is a lot of revenge, retribution, and a lot of death and killing. Which is fun and entertaining because there's a lot of magic.

While I liked this book my mind did tend to wander a bit. I think it's because the action scenes, for me, seemed to be best portrayed visually. This would make an awesome Hell Boy type movie. But that's not saying that the writing was poor. The writing was great! I loved that he took his "magic" from the life in the city. The pulsing of the trains, the whiz of the cabs, the flow of the water and electricity in the pipes and wires...I loved it. Just make sure you're in the mood for tons of action and magic. 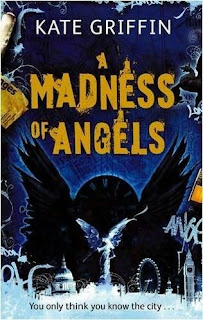