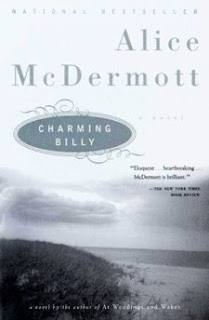 A while back I was reading a book blogger's post (I wish I remembered which one) about how much she loved Alice McDermott's books and how Charming Billy was one of her favorites. The next day at a library book sale I saw a copy for seventy-five cents and grabbed it up. I'm glad I did because it's my first book read for my National Book Awards challenge.

The book starts out with family members gathering together at a pub in the Bronx for the wake (they are Irish-American) of Billy Lynch. Yes, the charming Billy of the title is dead. He's left behind his wife Maeve, no children, but a slew of other family members. Maeve is holding up and even has a drink to toast her husband...which is noticeable since Maeve doesn't normally drink and since Billy died from alcoholism. And of course, as all big families do...gossip abounds. The main topic, of course, is the Irish girl Billy loved back after the War and whom he was going to bring to America and marry. And how she died before he could bring her over and how that affected his life.

So the story flips back and forth between the present day of Billy's funeral and the past. It's narrated by the daughter of Billy's cousin Dennis. And snippets of other family's members past events are thrown in.

Honestly, this book is really hard to review because it's really about a single plot. Instead, it just revolves around the life, love, and relationships of Billy's family. And it works because I was just absorbed by the story and the writing. And this is really impressive since there really is no single plot.

And I really liked all the characters, especially charming Billy. Here's an excerpt:

Billy drunk, in those days, was charming and sentimental. He spoke quietly, one hand in his pocket and the other around his glass, his glass more often than not pressed to his heart. There was tremendous affection in Billy's eyes, or at least they held a tremendous offer of affection, a tremendous willingness to find whomever he was talking to bright and witty and better than most.

I really liked this book because it offers an honest and beautifully written glimpse into the life of Billy Lynch and his family. 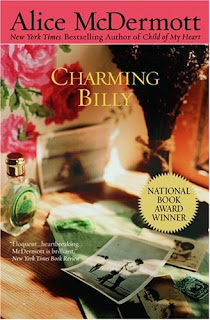 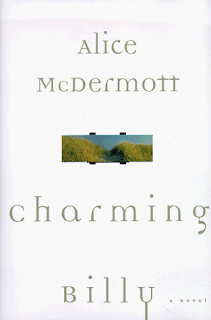