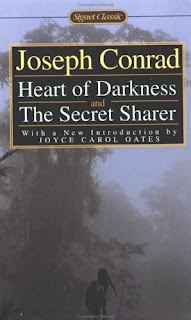 The other day I finished the book I was currently reading on the subway to work. My commute each way is about an hour...long I know but it gives me time to read. So I thought I'd swing by the library and grab a short novel for the ride home.

Back in high school I was supposed to read Joseph Conrad's book, Lord Jim, but never did. I kind of feel guilty about that one. So I grabbed this slim book which has two of his short books. Surprisingly, I really liked them. The Secret Sharer was a bit more easier to read than Heart of Darkness.

The introduction was really interesting though. I did not know Joseph Conrad...a great "English" writer was really Polish. His name is really Józef Teodor Konrad Korzeniowski. Wow, huh? That and he didn't really learn the English language until he was twenty. His books, well at least these two, have real moral and psychological undertones. I love that.

Heart of Darkness
Published in 1902, Heart of Darkness begins the story on a ship leaving London. Marlow, one of the English passengers on the ship tells a story of when he was a Captain of a boat in the Congo doing Ivory trading. He is given the task of going down the Congo River to retrieve a fellow ivory trader, Kurtz, who has quite the reputation in the region.

While the writing is very very wordy (the introduction even notes that), the imagery is very strong. He depicts the horrible conditions of the slaves in the area. And when he finally does meet Kurtz, the absolute lack of humanity in him is just...well plain scary. And that's when it gets sort of into the psychological aspect of the story. I mean Kurtz is a horrible trader who will do anything to get more ivory. I mean the guy has heads on stakes around his place. Just as a warning. But Kurtz has presence. Just pure evil genius. And Marlow actually starts to admire him. Not admire what he does or did but just the genius of it all. It really confronts that idea of the ability of everyone to be or do evil. Kind of like in World War II...how do regular people end up doing horrific things? Even the title of the story, Heart of Darkness is a psychological twist. Africa used to be called the "Dark Continent" but it's really about the darkness of the human heart.

The Secret Sharer
This short story, published in 1910, was a bit more straight forward than Heart of Darkness but still pretty good. The story is about a newbie Captain of a ship. He really hasn't gotten to know his crew or his ship. While he on watch during the night, he finds a naked man hanging onto the ladder of his ship in the water. He takes the man on board, hides him in his cabin, and learns his story. The man is named Leggatt and is from the ship, Sephora, which is nearby. During a horrible storm, Leggatt, in a fit of rage, killed a fellow shipmate because Leggatt thought the shipmate was being lax in his duties. He escaped punishment by diving in the water, feigning drowning and hiding.

So the Captain actually sides with this guy! He hides him, lies to his crew, and lies to the Sephora Captain. He even goes as far as to call this guy "his other self"...I mean he really identifies more with this murderer than with anyone else. Kind of crazy.

I'll have to read more Joseph Conrad. I love the psychological/moral twist in these stories. They really make me ponder things long after I've read them. And I love that Joseph Conrad actually went to these places since he worked in the French and British Merchant Navies. It makes me wonder how much of his stories he took from real life...which is kind of scary.
at 8:18 AM