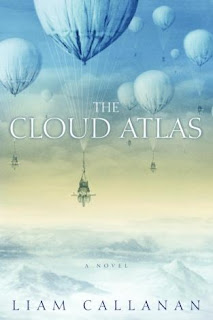 I picked up a copy of The Cloud Atlas by Liam Callanan at the library right before my trip to Egypt. I had thought at the time that it was the Cloud Atlas listed on the 1001 Books List. But no. Apparently there are two different books. Cloud Atlas by David Mitchell is a whole different book.
But I also picked up this book because the premise sounded good. Here it is:
Alaska: World War II. Louis, a young soldier on the bomb defusing squad is sent to Alaska on a top secret assignment. Find Japanese balloon bombs and disarm them. Oh, and make sure the public never hears about them.
Wow! Interesting, right? And it's actually based on true events. The Japanese did send balloon bombs across the ocean during World War II. Crazy, huh?
Not only is Louis supposed to deal with the balloon bombs, but his superior, Gurley, is one crazy guy. And...Louis falls for his Gurley's lady...Lily, an Yup'ik native who has secrets of her own.
I liked it. I wanted to really love it though. But at points in the middle the book dragged a bit (my husband agrees, he read it as well). But it was a good story and I really liked Louis. The story is told through an elderly Louis telling the story in a confession-like manner to a dying friend. So we see things unfold through the eyes of an older, wiser Louis...and the young inexperienced Louis. I really liked that aspect. And Lily's story is just heart-wrenching. And I even felt for Gurley. Ok, looking back maybe I liked it a bit more than I thought.
I didn't find any other covers for this book, which is ok since I loved this cover. So I thought I'd add photo of a real Japanese balloon bomb:

Have you read this book? I'd love to know your thoughts!
at 3:47 PM