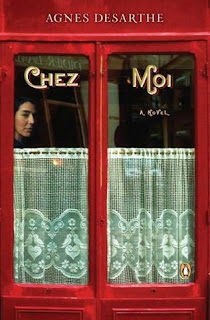 Chez Moi by Agnes Desarthe is another library book I picked up. I don't remember where I originally saw or heard about this book. It was originally written in French under the title Mangez-moi (Eat Me) and is translated into English. I hadn't read a review but it sounded a lot like Chocolat which I loved (ok...I watched the movie but haven't read the book...yet). And it's another book with a gorgeous cover that just popped out at me.

So here's the story:

Myriam, a woman in her early forties opens a small restaurant in Paris called Chez Moi. She is the sole owner and sole employee. With no formal training, Myriam is amazing chef but she's lied to get her loan for her restaurant and has no clue what she's doing. Along the way we start learning about Myriam's past and about what she's running away from...her ex-husband, her college-age son, and a horrible deed and secret she's hiding. (**Note: It may sound like a fluffy chick-lit book but it is not.)

I really really wanted to love this book. And certain parts I did. I loved Agnes Desarthe's writing. It reminded me of Like Water for Chocolate, they way Myriam thought and described food. Beware reading this while you are hungry. But I just never connected with Myriam. She was unreliable. She had serious issues. I kept expecting her to open up more but I never saw that change. And there's people who are a bit kooky, a bit crazy...and then there's people like Myriam whom I thought really had some psychological problems. So it's not as if I didn't like Myriam, I just thought she needed professional help. And while the ending of the book should have left me satisfied...it just didn't.

I am curious if anyone else has read this book and would love to hear your thoughts. I probably would have liked it better had I been prepared for the seriousness of the novel. I'll dig around and see if I can find any other reviews.

Oh, and if you read or have read the book you'll know why she named the restaurant "Chez moi" or "at home".

Here's another cover version I just don't like as much. This book is definitely too serious for a chick-lit-ish book cover...in my opinion: 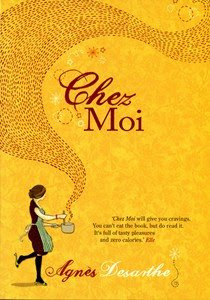 Also Reviewed By:
The Red Wheelbarrow Bookstore
Books on the Brain
at 11:29 AM