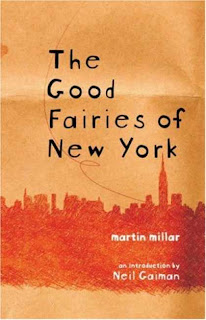 I decided to pick up a copy of The Good Fairies of New York by Martin Millar for Carl's Once Upon a Time III Challenge. I think I originally heard about it on Where Troubles Melt Like Lemon Drops' blog site. And it has an introduction by Neil Gaiman...very cool. It was a easy and fun read. But my final verdict is that, well, it was ok. I liked it. But I didn't love it.

Dinnie, an overweight enemy of humanity, was the worst violinist in New York, but was practicing gamely when two cute little fairies stumbled through his fourth-floor window and vomited on the carpet.

The main story revolves around a couple of Scottish fairies who've run away and somehow ended up in New York City's Lower East Side. Heather and Morag, are sort of your typical fairies: they drink a lot, fight, play the music excellently, and get into all sorts of trouble....like angering the fairies in Harlem and Chinatown by robbing them. Most humans can't see the fairies but some do: including a few homeless people and a couple of lone souls in the East Village: Dinnie and Kerry. Dinnie has a crush on Kerry who lives across the street, but Dinnie is a pretty vile character. And Kerry is preoccupied with a horrible health problem while trying to win in an art competition. Also, as part of a bargain, Heather helps Dinnie try and win over Kerry. And Morag helps Kerry sabotage her ex's production of A Midsummer Night's Dream. Oh...and Kerry loves the New York Dolls and the ghost of Johnny Thunders is roaming the Village searching for his beloved guitar someone stole. Oh, and at some point there's a fairy war between the good fairies of New York and the Cornish fairies from England.

Interesting, right? I liked Kerry. I could never stand Dinnie. And the fairies were pretty silly. It was funny and cute. But it just wasn't "wow" to me. I think it'd work better as maybe a graphic novel? Hmmm...not sure.

I did find this alternate cover which I like because the fairies wear kilts and Heather and Morag were pretty punked out. I could see them with green wings and purple hair: 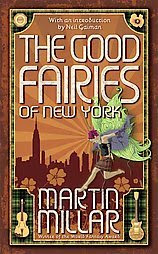 Also Reviewed By:
Where Troubles Melt Like Lemon Drops
Rhinoa's Ramblings
at 1:42 PM