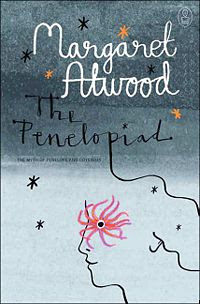 Before this year I had never read a Margaret Atwood book. Since then I've read The Handmaid's Tale and The Blind Assassin. I've been a fan of both books. So when I was walking by our local antique store and saw a cheap hardcover edition of her book Penelopiad: The Myth of Penelope and Odysseus I thought I'd check it out.

I've read excerpts of the Odyssey by Homer so I knew a little bit of the back story. But don't worry too much if you haven't. The back story is:

Penelope and Odysseus are married and he is soon sent off to fight in the Trojan War. Penelope is none too happy because A) She is newly married B) She just had a baby C) Helen (her beautiful cousin) started the whole mess D) The war lasts 12 years.

So after waiting 12 years, the war is over and Odysseus should be on his way home but gets waylaid...for numerous years. You can read about his exploits in the Odyssey. So Penelope waits at home, tries to stave off suitors who want to marry her, take care of her lands, and raise a son. When Odysseus finally returns, he proceeds to kill off all her suitors and hangs twelve of her maids. Penelope tells her story from the afterlife and explains why Odysseus decided to kill off the suitors and more importantly...why he would hang the twelve maids.

At first I thought Penelopiad was a pretty good story. I liked Penelope's viewpoint. Whereas the Odyssey glamorizes tales, spins yarns, etc...Penelope is more realistic and often cynical about what is going on. In some ways it reminded me of Sexing the Cherry by Jeanette Winterson but without Winterson's flair for the poetic. But towards the end I thought that perhaps Atwood should leave this type of story-telling to others. Points were driven...and then repeatedly driven. And some of the writing was a bit forced. BUT...it is a very small and short book so if you want to give it a try, check it out. Be prepared for quite a bit of, shall I say, feminist leanings.

Since I love covers...here's a couple more interesting versions: 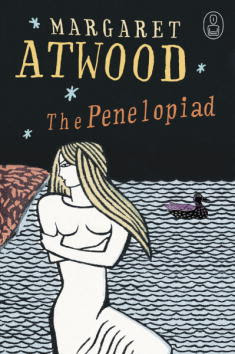 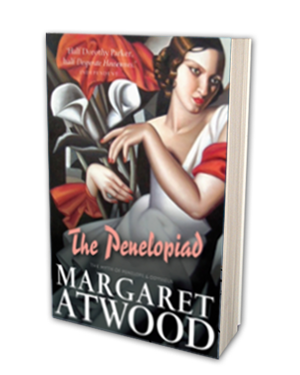 Adventures in Reading
Lost in a Good Story
Books I Done Read
Things Mean A Lot
The Hidden Side of a Leaf
Bold. Blue. Adventure.
A Book Blog. Period.