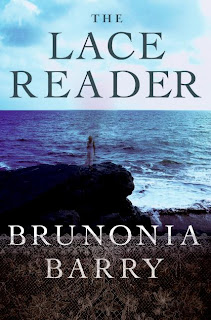 I received The Lace Reader by Brunonia Barry from The Book Club Girl and immensely enjoyed the book. I think I finished it in about two days. It is the perfect summer read in that it deals with family, friendship, mystery, love...the classic themes.

I have to say I loved the opening lines to the book:

"My name is Towner Whitney. No, that’s not exactly true. My real first name is Sophya. Never believe me. I lie all the time. I am a crazy woman. That last part is true."

Great, huh? Even my husband laughed and agreed that was pretty good...and he's pretty hard to impress.

Anyway, so I will try and summarize the plot which was just imaginative...dashed with a mystery, plot twists, and a bit of magic.

Towner Whitney has come back to Salem, Massachusetts after being in self-imposed exile in California for many years. She comes back due to the disappearance of her Great Aunt Eva. The Whitney women are all lace readers....meaning they not only create lace but can "read" the future for people in the pieces as well. Towner does not do this anymore. --Remember that the setting is in Salem...town of the famous 1600's Witch Trials. The author notes that while there were no actual witches back during those infamous trials...today Salem has become a hub for witches.

While Salem, the witches, and the lace reading all give the story a great magical backdrop...the real story is of Towner Whitney and her family. Towner Whitney has never been the same since her twin sister Lindley committed suicide when they were 17 years old. Towner went off the deep-end after it happened and is missing much of her memory. May, Towner's mother but not her sister's mother (confusing right?), has become a recluse in her island home and has dedicated her life to helping abused women. Other characters include Towner's Aunt Emma (Lindley's mom), her brother Beezer, her old flame Jack, Salem's Detective Rafferty, and Cal (estranged and abusive father of Lindley).

I was quite confused at the beginning (and for a while after) about Towner's family tree. Who was who's mother, sister, aunt, brother...it all got convoluted. But that's the point...keep reading. What I loved was the author's depiction of Salem and the almost normality of the magical-ness of it all. And I loved going along with Towner's memories while her damaged mind tries to figure everything out. It was a great and unusual perspective.

You might out-guess the twists and turns in the book...but that is ok. The book is about waiting for the characters to figure it all out.

Check out the author's website here and you can enter a contest to try and win a trip to Salem. 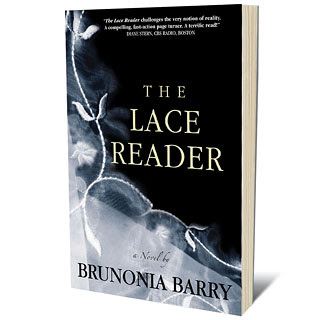 For those of you who've read the book: do you remember anyone actually reading lace during the story? Hmmm...

Also reviewed by (if I've missed yours let me know!):
In the Shadow of Mt TBR
Ticket to Anywhere
So Many Book, So Little Time...
Devourer of Books
A Girl Walks Into A Bookstore
Booking Mama
Adventures in Reading
Fizzy Thoughts
Book-a-rama
A Bookish Way of Life
at 11:06 AM