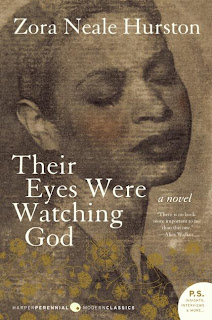 My friend at work tends to sometime give me books after she's read them. Examples of her generosity are My Dream of You and Mistress of the Revolution. So the other day she finished up Their Eyes Were Watching God by Zora Neale Hurston.

This is one of those books that I've been meaning to read (I have to admit) because I really like the title. I also love the cover of this edition. And I haven't read many books by Harlem Renaissance authors. So I thought I'd give it a try.

The book was written by Zora Neale Hurston in 1937. The story is about Janie Crawford who is living in a time period after slavery ended but during the Jim Crow era. Basically raised by her grandmother, she is married off at an early age to escape the fate of her grandmother and mother who both had children out of wed-lock. To make this even harder, Janie Crawford is a real beauty with gorgeous hair.

The story is basically a journey through Janie's life where she looks for love and finds herself. She has a few failed marriages and her travels take her from Georgia to Florida...from a prosperous stint as a weathly man's wife to picking crops in Flordia. It took me a while to get engrossed into the book. About halfway I started rooting for Janie to find herself and have the freedom to be herself and find love.

I have to admit I was pretty surprised that in the end I really enjoyed the book. The first half was a bit of a struggle and I wasn't sure if I was going to like it. I know that if I had tried to read this in high school I probably would have been really annoyed. The story is written in venacular so it takes a while to get used to. And I just wasn't attached to Janie's story at first. But stick with it and it's a wonderful story.

Oh...and I just noticed that there's a movie with Hallie Berry. I haven't watched it but...well, it's out there :)