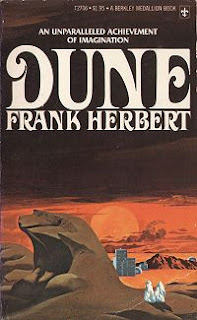 Dune by Frank Herbert has to be one of my favorite Sci-Fi books of all time. I first read it back in high school and I decided to re-read this one for Carl's Sci-Fi Experience.

Dune was written in 1965 and won the Hugo Award and the Nebula Award for best novel. So yeah, it's good. Luckily I found the first three books in the series in my apartment's basement. AND I won a copy of the new sequel, Paul of Dune, from Medieval Bookworm which I am reading now.

In the future, the empire is a collection of planets and each planet is ruled by a House. Dune's story follows the House of Atreides: Duke Leto Atreides, the Duke's concubine Lady Jessica, and their fifteen year old son Paul. They live on a lush world and are well loved by their people. But the Emporer has decreed that they leave their home world and rule a desert planet called Arrakis. The previous rulers of Arrakis were the Harkonnens, the bitter enemy of the House Atreides.

So what's so special about this desert planet? It's the only place spice melange is found. Spice is highly addictive and valuable commodity. It gives greater awareness, extends life, and is required for space travel. Whoever controls the spice has great power.

But treachery abounds once the family settles on Arrakis. Betrayed by a traitor, Paul and his mother are captured and left to die on the desert planet. The desert's greatest enemy (after death by dehydration) is huge sand worms, also known as makers. Just walking on the sand causes vibrations which attract these worms which can swallow up an entire mining operation. Oh, and the Fremen will kill you as well. The Fremen are the rogue desert people.

Paul and Jessica fall into the hands of the Fremen and becomes known as Paul Maud'Dib, a warrior and leader in the Fremen society. But is Paul the prophesied Fremen messiah? Will he get revenge for his family? Will he lead the Fremen?

Oh, this is just a great book. It's got tons of politics, intrigue, deception, treachery, battles, warriors, love and hate. It's got it all.

The cover above is the one I have but here's some other fun covers.

This one's my favorite with the huge worm: 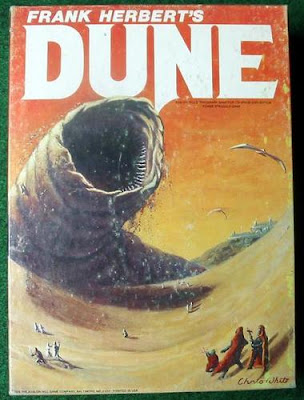 And I think this is the version I originally read: 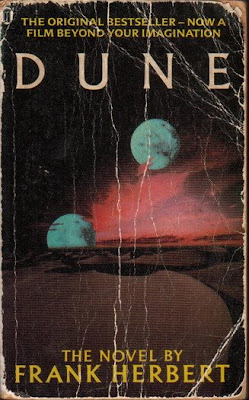 And of course, they made a couple great movies based on the book. The first one, Dune, made in 1984 is just classic. Here's some photos: 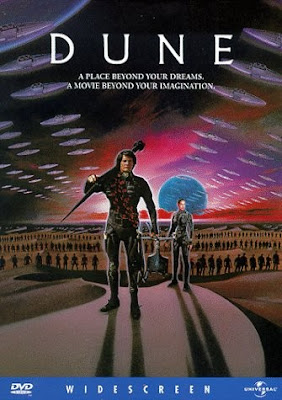 Here's Paul with a Fremen girl. I love their suits which are made to recycle the body's moisture for drinking. 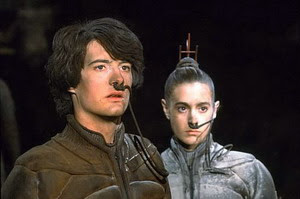 And of course, Sting is in it which is just too fun to watch: 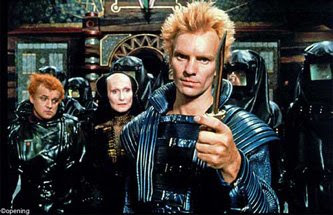 And back in 2000 there was Dune the miniseries, which was actually really well done. 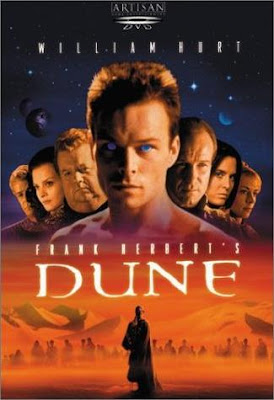 And while Google searching just now, I found this: 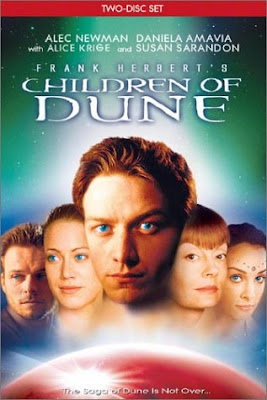 I love James McAvoy and Susan Sarandon and will have to watch this once I've read Children of Dune.
Also Reviewed By:
The Book Nest
In the Shadow of Mt. TBR
at 7:47 AM