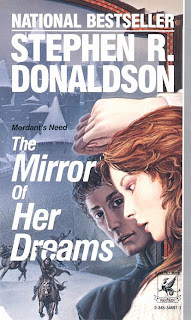 Stephen R. Donaldson wrote a two book series called Mordan't Need. The first book is called The Mirror of Her Dreams and the second is A Man Rides Through. I first read these two books years ago which I snagged off my dad's book shelf. Last year my brother found two hard back copies of the books and gave them to me. Since I am doing Carl's Sci-Fi Experience, I thought this would be the best time to re-read these two gems.

In The Mirror of Her Dreams, we meet Terisa Moragn, a New York City twenty-something girl. Her parents are rich so she lives in a fancy apartment in the heart of the city. The problem is she's lonely. We get the picture that she's unloved. Her parents were pretty mentally abusive...the type who's children should be seen, not heard (and usually not seen either). She has a dreary job and covers her apartment in mirrors just so she knows she exists. Sad, huh?

One night, as she's sitting in her apartment, making sure she still exists, when a man comes crashing through one of her mirrors. Half in and half outside of her world (via the mirror) he tells her he's been sent to bring her back to his kingdom called Mordant. They are in trouble and need a champion. Surprising even herself, she goes with him through the mirror.

I was going to write more but I think I'll leave it at that. There are battles and sieges, good guys and bad guys, princesses and champions, and all that fun stuff. And it's written very well. I loved seeing Terisa transform from a timid girl to a confident woman. And I just adore Geradon.

Re-reading these I did come across a few drawbacks. The books are LONG. Each one is about 600 pages. Yeah. But it goes quickly. And sometimes I think he could have cut out a lot of book to make just one book. Because if you read The Mirror of Her Dreams you sort of have to read A Man Rides Through to finish the story. But the good thing, is that you really end up getting to know all the characters and just immerse yourself in the story. It's escapism reading at it's best.


The two above covers are on the books that I've read. But here's other ones. 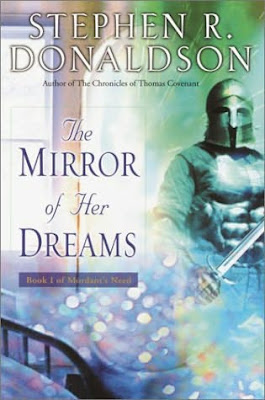 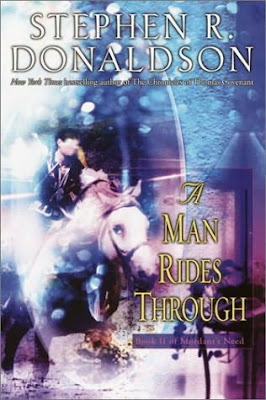 And an older version (a little boring though): 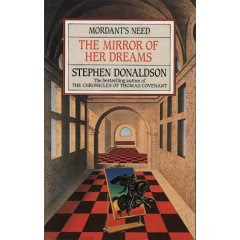 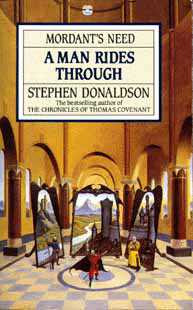 And a nice compilation of the two books in one: 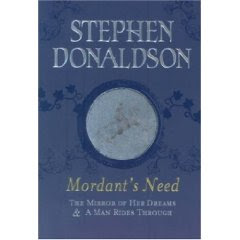 Have you read these or any other Stephen R. Donaldson books? If so, what did you think?
at 2:38 PM