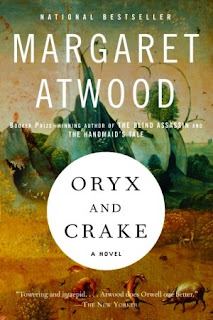 I picked up my copy of Margaret Atwood's Oryx and Crake at a library sale a while ago. I've heard some great things about this book and even a few fellow bloggers have recommended I read this. And I am so glad I did! This might be my favorite Margaret Atwood book so far. And, it also counts towards my Dystopian Novel Challenge AND Carl's Sci-Fi Challenge. Yay!

In the future, human life has pretty much become extinct due to a widespread plague. But our narrator is still alive. He's dubbed himself with the name "Snowman". While we follow Snowman through his trials of survival, he reminisces about his past life before the plague hit. His name used to be Jimmy. He lived during a time when "real" food, not Soy products or genetically altered food, was an anomaly. Gene splicing and experimenting was rampant. He recalls new animal concoctions, such as a pigoon (pig and baboon). Compounds have sprung up which shelter the wealthy, scientists, and elite. The rest of the world is a dangerous, "pleeband" area. As a young boy, Jimmy befriends a beyond smart boy, who's nickname is Crake. Crake's a genius. Crake is scary genius. And who is Oryx? Oryx is the nickname for the beautiful girl Jimmy falls for. As Snowman slowly tells his story, the pieces of what happened to his world fall into place.

Ok. I hope that's not too confusing. All I can say is this is one great novel. And it's so vivid too. I could totally picture Snowman wandering around in his sheet, trying to avoid the wild pigoons and other animals. If you haven't read this one yet, I definitely recommend it.

Now, for the fun alternative covers. This one makes more sense once you've read the book: 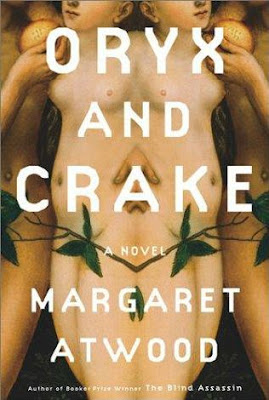 And the pig on this one still has me laughing. Look at it's face! 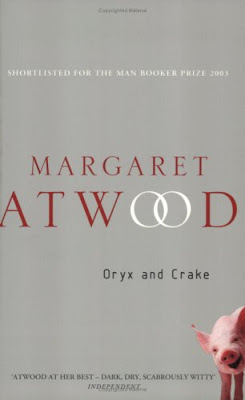 And this one is so boring. I would never have thought to pick this one up. 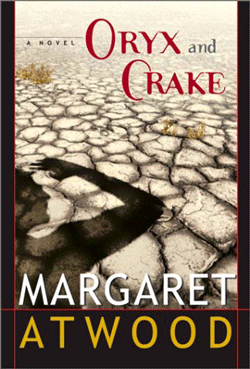