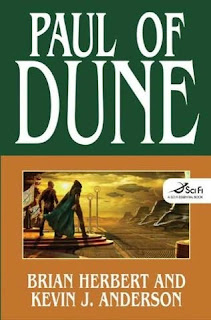 A little while back, I won Paul of Dune from Medieval Bookworm. I was excited because I've been meaning to read the Dune series. You can check out my review to the first Dune book.

Paul of Dune was written by Frank Herbert's son Brian and another great writer, Kevin J. Anderson. It tells the story of the years between the first book, Dune, and the second book Dune Messiah.

I am always a little leery when someone other than the original author writes part of the series. But this was great! It not only fills in the gap between the stories but also gives some history and background from when Paul was younger and before the events in Dune takes place.

I will warn you though that unless you've read Dune...or at the very least seen the movie, you will probably not want to read Paul of Dune. But from everything that happens in the book, it really is a must read for the series.