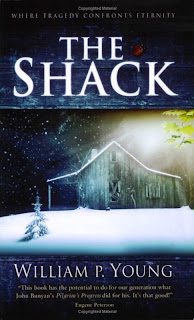 My brother bought my sister, my mom, and I copies of The Shack by William P. Young this year for Christmas. He works at a bookstore and said this is a pretty big best seller right now. Oh and he bought himself a copy as well.

So I made it my nightstand book and read it in two nights. And I really enjoyed it!

Ok, back up. When I first heard about this book, I thought it looked like a scary novel. A murder mystery. A horror book. Something along the lines of Stephen King. Umm..no. Definitely no.

While Mack's family on vacation camping in Oregon, his youngest six-year-old daughter is abducted. Her body was never found but it's assumed she was murdered from evidence found in a nearby shack. Four years later Mack receives a letter in the mail box, from "Papa" (his wife's nick-name for God), inviting him to come back to that shack for a talk with God.

This novel packs a lot of punch. The first part is so agonizing. It's more novel detailing the vacation and his daughter's abduction. It's heart wrenching. But the second half is definitely more philosophical and theological. It addresses that hard questions. Those "why do bad things happen to good people?" and "why does God allow it?" and "how does one forgive?".

It's definitely a Christian based book. And it might not appeal to everyone and will be pretty controversial. But for me, well it got to me and it's definitely going to be a re-reader. I am really curious what the rest of my family thinks. There are some really great points but then there are some that I'm not sure I agree with. So it's a great discussion book. My one complaint is the writing is a bit too simplified for me. I guess that's meant to draw in a wider audience but I kind of like my books to have a bit of meat to them.