I'm currently trying to start up a book club with some fellow co-workers here in NYC. We all love reading and I thought it would be fun to get out of the office once a month and meet for coffee or wine or something. So our first pick was After Dark by Haruki Murakami. I've read Norwegian Wood by Murakami already and thought he was an amazing writer.

After Dark is a short novel which takes place in Tokyo one night between the hours of midnight and dawn. Each chapter tells the time so you really feel like the night is inching by. The night, the dark, and the early morning hours felt more like a character than a setting. The story focuses on nineteen-year-old Mari who's reading alone in a Denny's. During the course of the night we meet a trombonist, the staff of a "love hotel", a prostitute, and a computer buisnessman. The reader also encounters Eri, Mari's "Sleeping Beauty" sister. How their stories weave is something only Murakami can do and only he can tell. It definitely feels like a long short story but he fleshed out all the characters so well in such a short amount of pages.

If you've never read Murakami before, After Dark is a great way to be introduced to his writing. However, I would definitely recommend Norwegian Wood, it's just an amazing book. I will definitely be reading more Murakami in the future.

This one is very beautiful: 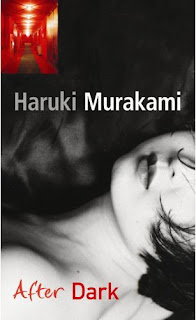 But I kind of like the version with the full moon and the city better: 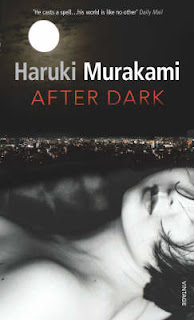 I'm not too big a fan of this one. It just doesn't really fit in with the story: 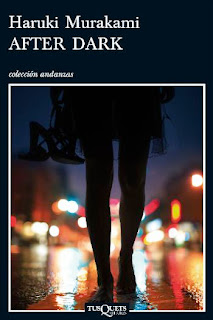 I think this one is pretty popular and it's ok: 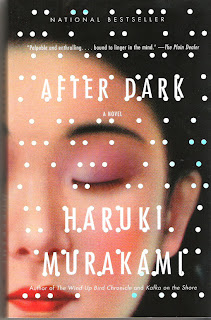 And for some reason, this one is just kind of creepy to me: 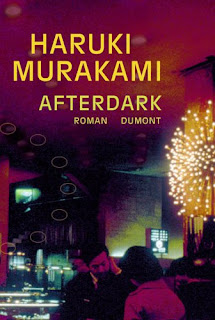 In Spring It Is The Dawn
BookBath
Caribous Mom
Stainless Steel Droppings
Books and Border Collies
Stuff as Dreams are Made On
at 10:26 AM