The Information Officer by Mark Mills is another book I won from LibraryThing Early Reviewers program. It's a part serial killer/murder mystery/love story/WWII novel set in Malta.

Malta is a small island in the Mediterranean just south of Italy. Before this novel, I had never heard of the Siege of Malta. During WWII, it was pretty much the most heavily bombed place ever. Wow. The Allies were stationed on the island and were helping to fend off the Germans and Italians from invading.

Enter the Information Officer, Max Chadwick, a British officer in charge of, well, information. Obviously with all the bombing going on, morale can be quite low. So Max is in charge of keeping certain information hidden that might hurt the campaign, while promoting the heroism and valor of the Allies and Maltese.

On top of all that, Max is called in to check out the body of a young girl who was found dead, murdered. In her hands is the scrap of a officer's uniform. The coroner believes she was not the first victim. Obviously Max is in a bind: he can't let the Maltese people know that one of the Allied officers may be killing their girls. Creepily, some of the chapters are narrated by this unknown killer providing the reader with a disturbing glimpse into the killer's mind.

On top of all that, Max is in another predicament. He's been seeing one lady while he's fallen in love with someone else.

So this seems like a lot of stuff going on, but Mark Mills handles it wonderfully. The picture he paints is so vivid. Imagine constantly being bombarded day and night. Often, people just go up on roofs to watch the current wave of bombs. People have bomb shelters but they also hide in various tunnels throughout the island. They don't drive because the dust kicked up becomes a prime target. But life goes on.

I think the setting is what I loved about this book. I'm big into the history part of historical-fiction. The murder mystery is an added bonus. The only part of the book I didn't quite like is the love story part. I don't want to have any spoilers, but it was one of those things where you felt for Max but he kind of shot himself in the foot on this one (figuratively, not literally).

Here's a different cover of the book (beautiful!): 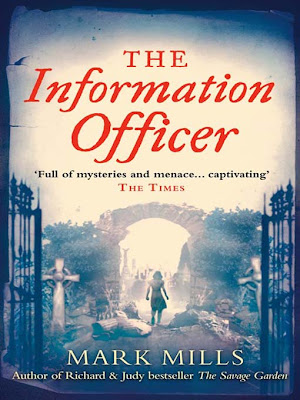