The Creed of Violence - Boston Teran 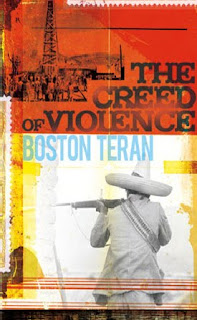 The Creed of Violence is the second book I've read by Boston Teran. I was asked to read by Kelley and Hall and I took one look at the title of the book and the cover and I was sold. And it did not disappoint.

I want to say that The Creed of Violence is a departure from Teran's novel Giv: The Story of a Dog and America that I recently reviewed. But based on all Teran's novels, I think Giv was the departure. While this is a gritty and often violent tale, what surprised me was the touch of humanity that was infused by the relationships of the main characters.

The Creed of Violence starts out on the Texas/Mexico border in 1910. Mexico is rumbling for revolution which is a problem for both countries because of Mexico's much-needed oil fields (hmmm...sounds eerily familiar). John Lourdes is a young agent in America's Bureau of Investigation (early FBI). His job is to take the criminal known as Rawbone and travel with him and a truck full of weapons across the border into Mexico undercover. Rawbone is working with the Bureau to gain immunity. Problem? Aside from the obvious dangers of working undercover in a country on the brink of revolution, Rawbone is John Lourdes dead-beat father. John Lourdes knows this. Rawbone does not.

I really enjoyed this book for two reasons: the setting of the novel and the relationship between father and son. I could totally see why The Creed of Violence is being adapted in to a movie. What a violent and vivid portrait he paints of Mexico, the revolutionaries, and America's intervention into the fray. The setting sucked me into the novel but it was really the relationship between Rawbone and John Lourdes that kept me reading.

Here's the first line of the book which is about Rawbone:

"He was born in Scabtown the day Lincoln was assassinated at Ford's Theater."

I love how it starts out. Rawbone is a criminal and a common killer. He never knew his father and his prostitute mom died when he was young. Left on his own he turned criminal. Honestly, I kind of liked him. He was sort of funny with a type of wit that made him a likable character. John Lourdes, ironically, had a similar sad upbringing. Rawbone was married to his mom and then took off when Lourdes was young. His mom passed away shortly after. But instead of turning criminal like Rawbone, Lourdes joins the Bureau of Investigation. He's angry at Rawbone and really wants to see him dead.

But their journey together changes them. And that's the part of The Creed of Violence that I enjoyed. I'm excited to see how this book will be adapted to the big screen. I wonder who would portray Rawbone and John Lourdes.

**Has anyone read anything by Boston Teran? I've heard that his book God is a Bullet is really really good. I'm going to have to check it out.

**I still want to know who Boston Teran really is. Arg.