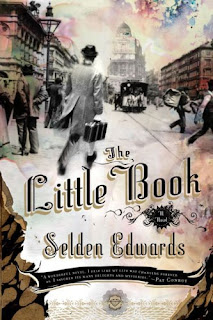 I've been in a bit of book blogging slump lately and it's mainly because of Selden Edwards The Little Book. I just can't figure out what I want to say about it. So I'll give it a whirl. In a nutshell...not too thrilled with it. I finished it, so that says something. Actually I was pretty annoyed that I couldn't just quit reading it...so I finished it. But not my favorite read of the year. And since I wanted to love it...man it was disappointing..but mainly since I had such high expectations. But I love the cover darn it all. See...I'm torn.

Legendary musician, baseball player, and perfection embodied, Frank Standish Burden III, known as "Wheeler," is in his forties when he somehow gets transported back in time to Vienna, circa 1897. There he meets his father, whom he never knew since he died in WWII, and a slew of other characters of Vienna's elite including Freud, Mark Twain, and other intellectuals. He also meets his grandmother and old professor, the "Venerable Haze," who were in Vienna at the time. Oh and Hitler as a boy is somewhere in there. The books flashes between his time in Vienna in 1897 and detailing his life's accomplishments. And the book is supposedly written by Wheeler's mother.

1) The writing was pretty good. Definitely a lot of research. Selden Edwards was an English teacher and began writing this in 1974. So a lot of years went into this book. And it shows.
2) The history aspect of Vienna. I took Eastern European classes in college so not a lot of the information was new but still very interesting.

Ok. That's it. Here's why I was annoyed.

1) If I saw the word "legendary" or "venerable" or whatever again I was going to scream. I understand that Wheeler was a legend...the perfect game, the perfect pitch, his band became the epitome of 1960's music and he wrote the anthem for the age. AAAARRRGGG.
2) It was written by his mom. HIS MOM! Mom's are notorious about perhaps glorifying or hiding the negative.
3) His love affair. I'm not saying anything...but it was creepy. That's all I'm saying. You'll have to read it to judge for yourself.

But just because it wasn't my cup of tea, I can understand if people like it. And a lot of people really do.

I read a review in the Washington Post though that totally nailed how I felt about the book so at least I know I'm not alone.

So I'm curious...have you read it? If so what did you think?

Also Reviewed by:
The Tome Traveller's Weblog
The Book Lady's Blog
at 2:11 PM