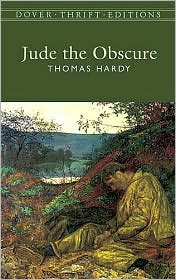 I found Thomas Hardy's book Jude the Obscure in one of the bookshelves in our basement where we do the laundry. The Super of our apartment is pretty cool because there are a couple of bookselves where people in our apartment can donate books for others to read. I've found some great books down there! The other day I found the Thomas Hardy book and thought the title was pretty intreging so I snatched it up.

I've only read one other Thomas Hardy book, The Mayor of Casterbridge, and thought it was a great book. Also, if you love Masterpiece Theater movies on PBS, Tess of the D'Ubervilles and Far From the Madding Crowd are wonderful!

Jude the Obscure became my book I read on the subway. In all honesty, I'm not sure I would have finished the book had it not been the sole reason for staying away and alert on the ride to and from work. The premis of the story centers around the character of Jude Fawley who is an orphan and is insanely smart and driven. Without any outside help, he learns languages, reads tons of books, and has aspirations to go to Oxford. However, his attempts are thwarted by Arabella who snags him into a marriage. When that marriage falls through, he seperates and meets and falls in love with his cousin Sue.

You can see where this is going. Basically a long long book with a sad sad ending. In all honesty, everyone in the book adores Sue but I think she's a terribly annoying and self-centered character. The book caused quite a scandal when it was published and Thomas Hardy never wrote another novel again. Wow. I assumed or was lead to think that the scandal was because they were cousins. But after reading it, I think the scandal was because the main characters went against the norms. There's pre-martial sex, divorces, couples living together and not getting married, characters questioning God and religion, and all sorts of other "modern" ideas. The book was published in 1895 and I think if it was published after the turn of the century it would have been received better. As for me...it's a darn sad book.