I was granted permission (via my sister) to post photos of my nephew since she says they read my blog together. That's so cute. So I am going to gush a bit because he is adorable. I took care of him for a few months after my sister went back to work after he was born so we really bonded. I miss him a lot.

I like to call him Ol' Blue Eyes because A) I like Frank Sinatra and B) Look at those eyes!!

My sister and the little cutie. I just can't get over his beautiful eyes :)

He loved hanging out with his aunty. And yes, socks make excellent gloves.

He was born pretty early about one or two months early. (You can tell I've never had kids because I don't really know about the whole measuring time by weeks) :) He was so so little but had such a great laugh and smile.

The other reason why we was so small is because unbeknownst to all of us he has a extremely rare form of diabetes. He was always so hungry and ate all the time and didn't gain much weight. Finally he crashed and they diagnosed him with Type 1 Diabetes. He was put on regular insulin shots which helped tremendously and he fattened up to a chubby little baby. It was sad though because he couldn't snack or eat like a regular baby. Ever few hours he was pricked and tested to see if his sugar level was high or low. He had to have shots before he ate...shots in the morning...so so sad.

But something still wasn't right. He has some developmental delays and the insulin shots didn't affect him sometimes the way it should. It wasn't until my sister was shown an article about a rare form of a genetic mutation that looks like Type 1diabetes but really isn't. It's called Monogenic Diabetes. His story is listed on the website if you want more information. Tests for Monogenic Diabetes had been done in the U.K. and just a hand-full of children in the U.S. had been diagnosed. If he had this, it was treatable by just taking some pills every day. No more shots!! My sister sent away his blood test and months later she found out that yes!! he has this gene mutation. The little guy went to treatments in Chicago for a few days and now he just has to take pills everyday. He is only the seventh or eigth kid in the U.S. to be diagnosed with this. What a miracle!!

What's amazing is that none of the doctors in Alaska figured this out. If my sister hadn't read the article about a little girl diagnosed only a few months earlier, and they hadn't gone out and asked for the test themselves, they would never have known he had this type of diabetes. My sister actually even emailed the doctor listed in the article and he personally responded. It was amazing how it all worked out. My sister is quoted in the section about my nephew saying "If you know there is something wrong with your kid, keep looking, and eventually you will find the answer," she says. "I knew his developmental issues and diabetes were associated. People tried to tell me he had autism, and lots of other things, but I knew that wasn't it."

This is him kissing daddy's truck last summer: 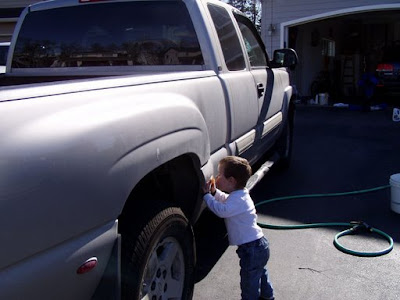 My nephew is now three and a half, going to a little pre-school for a few hours each day. He just said "aunty" (I love it!). When I get more recent photos I'll post them :) You're lucky I only used photos I have at my work computer :)