My husband and I are still enjoying planning our honeymoon for next September. We are going to the Italian Riviera and you can check out my blog post about that. In the meantime, I am going to reminisce about my trip to Italy back in 2003. I think I went in October-ish sometime. I went with a couple people from the University and we went to flew in to Piza (saw the leaning tower), took a train to Rome, and then was in Florence for a night. I would love love love to go to Florence again since I didn't get the chance to see any of the museums, shops, etc. But here's what I did see.

We took a bus in to town and to our lodgings. We stayed at Camping Michelangelo which has an awesome location overlooking the city: 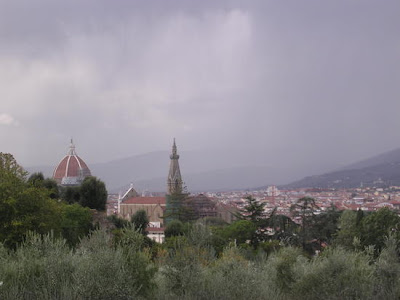 It was a cool little campsite where you could either RV it, camp using your own gear, or use these already set up little blue tents with beds and blankets (no lights though so bring a flashlight!). It was great because there was a general store with tons of wine produced by Camping Michelangelo among others, picninc tables were everyone of all sorts of nationalities hang out at night, chat, talk, and share wine and stories. There is also a washer/dryer (which was great because my clothes got drenched in a downpour in Rome the night before). Here's some more views which capture the Duomo perfectly: 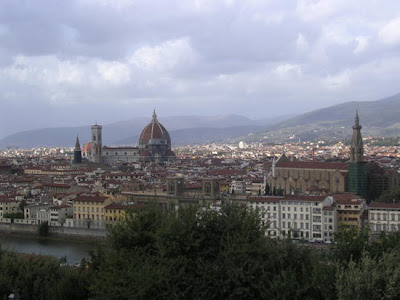 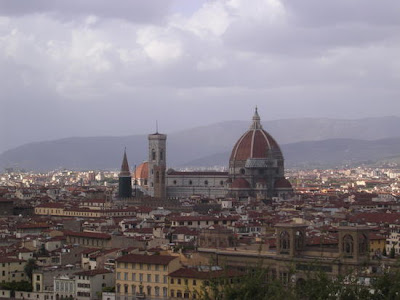 You know you are nearing Camping Michelangelo because of the huge statue of Michelangelo's David by the road: 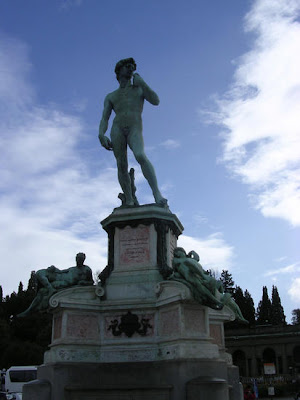 The real David is in the Accademia Gallery in Florence while a copy of where the original once stood is in the Palazzo Vecchio. The copy was being restored when we scampered by so I don't have a photo.

Being around four or five in the evening by the time we dumped our belongings off we literally ran down the hill, across the river, to the city to see what we could while it was still daylight. We ran to Duomo which was amazing! 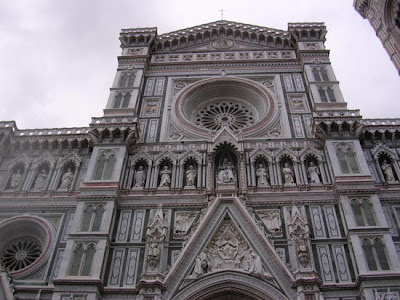 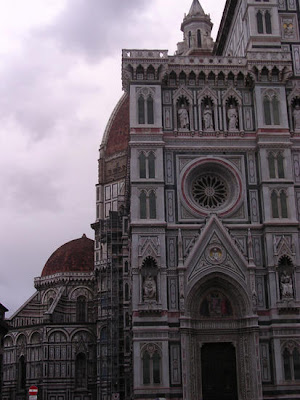 I was so excited to see the Duomo because I had learned all about it's construction during my art history class. The building had been completed in 1380 but no one could figure out how to put a dome (cupola) over it because the span was so huge. Contests were held and there was a huge rivelry between Lorenzo Ghilberti and Filippo Brunelleschi. Brunelleschi won the contest and mastered the cupola to the cathedral. If you are interested in the architecture, it is an amazing feat. Think of the Duomo as leaves resting on a drum with the spire (light house) on top holding all the leaves from springing out. There's a walkway inside the dome spiraling to the top which is what the workers used during construction. We didn't have time to go to the top but I will someday. We did pop our heads inside to take a look at all the marvelous frescos by Vasari.

If you feel bad for Ghilberti for losing the contest, don't...he won the commission to do the beautiful Biblical plates for the doors: 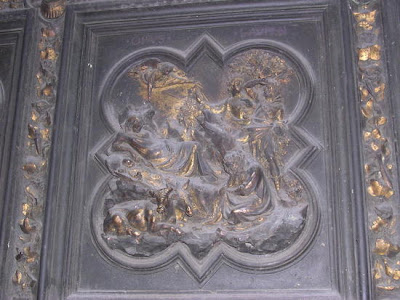 Funny story...while I was taking photos of the Duomo an Asian businessman said something to me I didn't understand, handed me a fake flower, and pointed behind me. I turned to look and there were at least fifty Asian businessmen grinning at us. The guy puts his arm around my shoulder and they all took a picture. He said thank you and they all took off. Weird.

So after seeing the Duomo we went to the Palazzo della Signoria and grabed a slice of pizza at a little restaurant. The Palazzo at night is amazing: 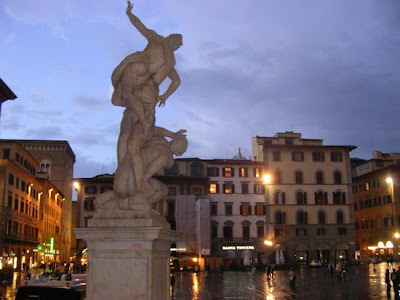 We rambled some more around the Uffizi Palace (very creepy at night), statues everywhere, and finally saw the Ponte Vecchio (Old bridge) which spans the Arno River. 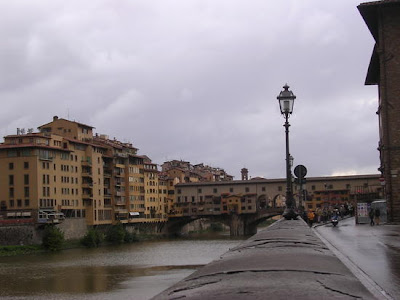 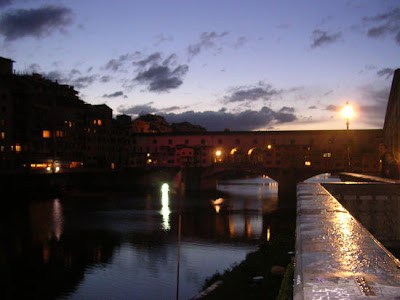 The sun was setting beautifully by the time our bus arrived and we went back to the camp site and drank some wine with fellow travelers.