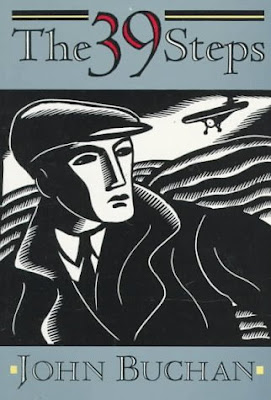 Earlier this year I decided to read John Buchan's classic novel The Thirty-Nine Steps.  Apart from it being on the 1001 Books to Read Before You Die list, it is also a Broadway show that the hubby and I had wanted to see before we left NYC.  I'd like to say we got the chance to see it, but we were a day late.  They had closed down for a period as they were moving venues.  Sigh.
But! PBS had a showing that weekend of a newer BBC version of the movie (more about the films below) so we still got our date night.
But you want to know what the book's about, right?  Here's how it starts out:
"I returned from the City about three o'clock on that May afternoon pretty well disgusted with life."
Richard Hannay has just returned to London after being in Rhodesia.  It's May 1914 and Europe is on the brink of WWI.  However, Richard is bored:
"Here was I, thirty-seven years old, sound in wind and limb, with enough money to have a good time, yawning my head off all day."
After returning home one night, a man approaches him at his apartment door and basically invites himself in.  This man, Schudder, lives upstairs, is an American from Kentucky, and has learned a bit too much of European politics.  Schudder tells him:
'Pardon,' he said, 'I'm a bit rattled tonight. You see, I happen at this moment to be dead.'
They sit down and Schudder tells him some things, secret things involving a German conspiracy to kill the Greek Premier.  Schudder's life is in danger and he's had to fake his death to get away from the bad guys.  He also has to stop the conspiracy.  Richard Hannay, while not sure if this man is crazy or not, decides to help him. However, a few days later, Hannay returns to find Schudder dead in his apartment.  Unable to call the police for fear of being accused of Schudder's death, Hannay takes Schudder's notebook, flees the scene, and must elude Schudder's murderers, stop the German conspiracy, and basically save the day.  Oh, and you'll just have to read the book to figure out what the 39 steps refers to.
I absolutely loved this little spy story.  I read the book for free online over at Project Gutenberg.  This is the first of five novels about Hannay.  They are short but chock full of adventure.  Hannay also kind of cracks me up since he's so obviously not your normal hero.
On to the movie:  The new BBC version was very very good.  I love that Rupert Penry-Jones was cast as Hannay: 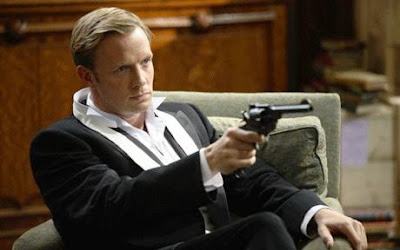 If you've seen the newest version of Jane Austen's Persuasion (my review), you'll recognize Rupert.  I've got a slight crush on him because of that...and he's in the BBC MI-5 (also called Spooks) series which I also love.  Side note: If you like Matthew Macfadyen, Keeley Hawes, Rupert Penry-Jones, or Richard Armitage - check MI-5 out.
The book and movie both have all those lovely little spy elements that I love.  Apparently Alfred Hitchcock thought so too.  He made a movie version of The Thirty-Nine Steps in 1935.  I haven't watched his version yet. 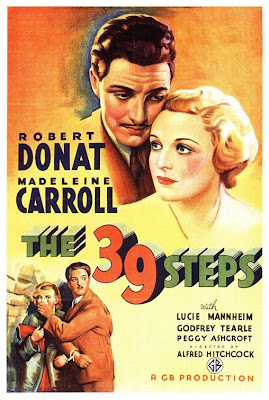 I love how the modern BBC version reminded me of the old classic spy movies.  Notice the lovely plane scene in the modern version: 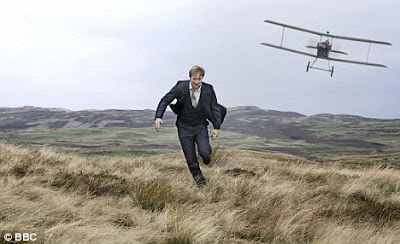 Doesn't this remind you of the 1959 movie North by Northwest with Cary Grant...also a Hitchcock film? 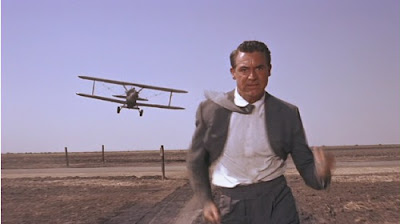 One of the things I love about blogging is that while writing posts, I find the most interesting posts on other blogs.  Check these out:
Lights, Camera, History - Post on BBC film version (one of my favorite blogs on period films)
Redtree Times - Post on Alfred Hitchcock version