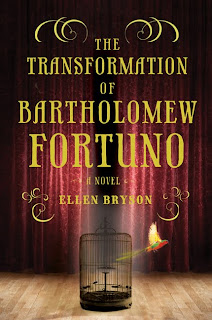 A little while back I heard about Ellen Bryson's book, The Transformation of Bartholomew Fortuno, on Shelf Awareness and requested an advanced reader's copy. The book comes out this June. Look at the cover, doesn't it just look gorgeous? This is one of those books that I enjoyed from beginning to end and got me out of my reading slump. I still can't believe this is Ellen's first novel.
The story revolves around Bartholomew Fortuno, dubbed "THE WORLD'S SKINNIEST MAN" in P.T. Barnum's museum in New York City. P.T. Barnum is the same guy from Barnum and Bailey Circus. It's 1865 and the Civil War has just ended and President Lincoln has just been shot. But this story isn't about Lincoln or the Civil War. It's about the Curiosities (the freaks and oddities as they were called) who actually lived in the Barnum's museum.
Bartholomew Fortuno is considered a True Prodigy, one who was born with his "gift." But his world is rocked when a mysterious veiled lady arrives under cover and is rumored to be a new act. From that moment on, Fortuno's life will never be the same.
I absolutely loved this story of Bartholomew Fortuno. The entire time period and feel of New York City and the Museum comes alive, but it's Fortuno's story, as well as the other Curiosities, that I fell for. Fortuno struggles with past and with his future as he grows in character and as a man.
I had briefly heard about P.T. Barnum's odd museum which later on burned to the ground. A few years ago, some CUNY students recreated the museum online in a wonderful interactive site. If you've never checked out the Lost Museum website, I urge you to go check it out.
I loved that Ellen took pains to include authenticity into the book. For example, every once in a while there are hand written letters or Notices for the museum performers. Here's an example: 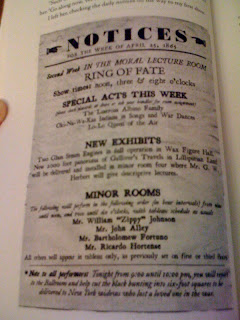 **Ok. I normally try to end these reviews on some sort of note, but I have no clue this time. Just read this book. And then tell me what you think. Yeah? Ok. Deal.