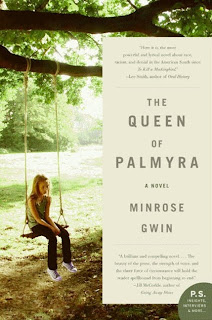 I was asked to join the TLC Book Tour for Minrose Gwin's novel The Queen of Palmyra. I'll have to admit that I was a bit hesitant because this is not normally the type of book I choose to read. But since I moved to the sort-of-South, I thought I'd broaden my horizons in reading. All I can say is Thank Goodness I did because this is an amazing novel. I sucked it right up and immediately gave it Five Stars on GoodReads.


The Queen of Palmyra takes place that fateful summer in 1963 in Mississippi when temperatures got to record breaking highs, JFK and Medgar Evers were assassinated, and the country's racial tensions were at an all time high.


Florence Forrest is a young white girl and it is the summer between her fourth and fifth year in school. However, she is way behind in studies because for the past year, her father and mother have been on the "lam" as she calls it, traveling around while her father unsuccessfully tries to hold one job after another. They finally return home to Millwood, Mississippi and that's when things start to crumble.


Florence's father, unbeknownst to her, is part of the Klan which is something her mother abhors. However, her father is a bit of a terror and as their marriage slowly crumbles, he tries to keep Florence close by telling her stories that have deeper darker meanings. Her mother manages a quite successful cake business but Florence starts being pawned off more and more on others, mainly Zenie, her grandmother's black housemaid. That summer, Zenie's college student niece, Eva, comes to stay with them. Florence is made a witness to all and must finally grow up and choose for herself which path she must follow.


I found this to be such an absorbing novel. I normally don't choose to read novels with such obvious serious topics. In the past, I normally tried to read lighter books for an escapism type of enjoyment. But I'm finding that more and more I'm steering toward books with tougher topics. This is definitely one of those novels.


Florence is such an interesting character because of her obvious lack of understanding but she observes everything and tries to figure out what is going on. She's such a neglected character. She is left to fend for herself often and goes long periods of time without food, a bath, or a a change of clothes.


I have to say that all the other characters were so well written as well. Her father, though while a terrifying character, is flawed and realistic. Her mother refuses to stand up and chooses to escape. Zenie and Eva were my favorite characters. Zenie, named after Zenobia the Queen of Palmyra, tells Florence stories about the Queen. While a good influence on Florence, Zenie views the care-taking of Florence as just another job and often refers to the girl as "it". Eva...well you'll just have to read the story to find out about Eva.


I keep wanting to blab about the book so I think this would make a perfect Book Club book. While I've never read The Help, I have read The Color Purple and Their Eyes Were Watching God.


***Would you recommend any books like this that are all absorbing? 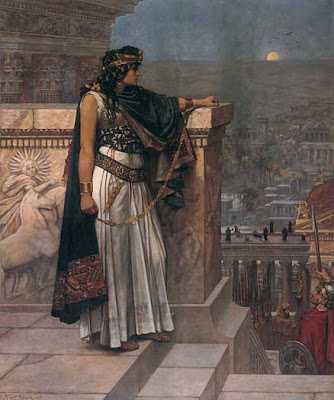 This is Herbert Schmalz's 19th Century painting of the Queen of Palmyra.


Now for the giveaway: I have an extra copy of The Queen of Palmyra. All you have to do is leave a comment, a way to contact you, and answer the question is asked just above. The giveaway is open through June 11th and like always, my contest is open international so good luck!