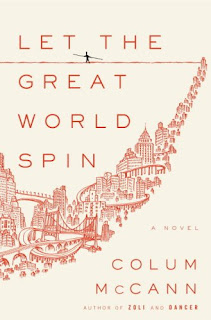 Last night I finished reading Colum McCann's novel Let the Great World Spin. It won the 2009 National Book Award and I can see why. When I first heard about this book with it's NYC setting, I wanted to get my hands on it. So of course when I was asked to join in the book tour for TLC Book Tours I was ecstatic.

Let me start my synopsis by quoting a piece from the novel: It had never occurred to me before but everything in New York is built upon another thing, nothing is entirely by itself, each thing as strange as the last, and connected.

I love this quote. It depicts New York City AND the novel so very well. Most of the book takes place or focuses on NYC, 1974. We start the story centered around two Irish brothers in the Bronx. The story then skips perspectives, darting around the city but each story is somehow connected to each other. Pivoting in almost each story is the August event of Philippe Petit's tightrope walk between the Twin Towers.

When I first heard about this book, I thought it was going to be a series of interconnected short stories. That's not really what it is. It's a full novel with various perspectives. Front and center is the story of Corrigan, an Irish man of God who moves to the Bronx to work with people in need. Think of Corrigan as an odd modern Francis of Assisi. Corrigan's story is mainly told through the eyes of his brother but we hear from nearby prostitutes as well. Then the story skips to others: an Upper East Side wife, a wealthy judge, a single black mother who's lost her son in Vietnam, an artist who's fifteen minutes has come and gone, and many others.

I can't tell you all the voices in the story without giving away some of the pivotal story, but it's all interconnected. Just like the city. I remember living there and even though there are so many many people, the city hummed as one. If it was a bleak rainy day, everyone was bleak. If it was a beautiful sunny Spring day, everyone perked up. But what intrigued me was looking back into the past life of NYC and it's people. This glimpse in 1974 is not pretty. People were used to being mugged, seeing prostitutes on street corners, and drugged up people daily. I remember hearing stories from my neighbors about heroin needles on the street and the drug running from Jersey. While NYC today is a much cleaner and safer place to be, living there I often turned a blind eye to the darker aspects of the city. I remember one winter's day, seeing a homeless man on the subway going around stealing the coats of other homeless people sleeping on the benches. He had about five coats and was picking up his sixth. But what do you do? I'm not proud to say what I did (turn a blind eye) and what Corrigan would have done is not the same thing.

Was this book good? Yes. Was it a difficult read? Yes. Does it make me think? Yes.

I'll end this review with something Colum McCann wrote at the end:

The world spins. We stumble on. It is enough.