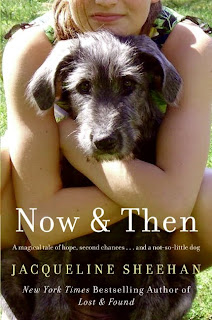 I was asked by Stephanie at Harper-Collins if I wanted to read and review Now & Then by Jacqueline Sheehan. I took one look at the puppy cover and said OK! I have a soft spot for "not-so little" dogs since I have one of my own.

This book is a bit of a trip. Take chick-lit, a bit of romance, Irish historical-fiction, and time travel and mix it all up, throw in a little bit of Irish wolfhound and you've got Now & Then. And I totally enjoyed it. **Warning: The dog plays a fairly small part in the story.**

Anna O'Shea is a bit of a mess. Her father abandoned the family, her brother has anger issues, her nephew has just landed in jail, and her husband left her for another woman after three failed pregnancies.

Joseph O'Shea is a bit of a mess. He's sixteen, unpopular at school, and only good at wrestling, not the most popular sport at school. His father just got into a huge car accident while on his way to pick up Joseph from jail and his aunt, Anna, is furious with him.

Enter the time-travel. How? Why? Read the book!

Anna and Joseph get whisked back in time to country Ireland, 1844. Just one year before THE potato famine. And they get separated. Anna is injured and is taken in by some of the country people. Joseph gets taken for a non-Irish Canadian and is taken in by a wealthy Englishman. And of course, they both fall in love with someone while in historic Ireland. Anna and Joseph have to find each other, figure out what happened and why, and how to get home...if they still want to go home.

I enjoyed the sections narrated by Anna. I really liked her and just wanted her to be happy. I loved the historical setting in Ireland. The way the Irish were suppressed by the British landlords and what they had to do to survive was fascinating and horrible at the same time. I love that it was kind of realistic too. Anna got beat up quite a bit which I don't think you'd find in a romance novel. I mean, at one point she looses some teeth. O yeah.

Ok. I think the cover and blurb is so misleading. I thought this book would be more dog-centric, right? Wrong. Well, mostly wrong. There is a dog. An Irish wolfhound name Madigan. He has more to do with Joseph's part of the story. But just a bit. Madigan's importance really only comes out at the very end. And speaking of Joseph, he was so annoying. I guess he's a sixteen year-old but still. Hmm...I guess that is it.

While it wasn't the story the cover led me to believe it was, it was still a fun time-traveling ride. I have to admit I'm a sucker for Irish history so that was a huge bonus for me.

Over at Harper-Collins, you can browse inside the book.

Stephanie also told me I could give away FIVE copies of Now & Then. How cool is that!?! It's open worldwide (if Harper can't deliver to you, I will) and it runs through Friday, November 20th. You must:

For more reviews, Jacqueline Sheehan is over at TLC Book Reviews

**Thank you Stephanie and Harper-Collins for giving me this book to read and review!