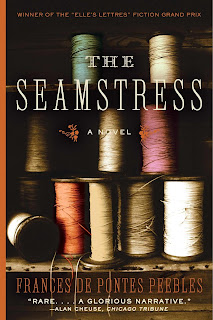 I don't remember where I first heard about Frances de Pontes Peebles' novel The Seamstress, but apparently I added it to my TBR pile on GoodReads back in February of last year. So when The Book Club Girl mentioned a giveaway and a chance to participate in a On Air show for this book, I jumped on the chance.

Due to a change in my work schedule I was unable to participate in the show but I absolutely devoured this book. It has to be one of my favorite reads this year. This is totally my type of book. I read a few review blurbs on the first few pages of the book. One mentioned the similarity to Isabel Allende (whom I love) while another compared scenes to a Quentin Tarantino flick. Ok, that's just cool.

1920's Brazil - remote mountainous region: Two sisters, Emília and Luzia dos Santos, parent-less, have just moved in to live with their seamstress aunt. The aunt teaches them the ways of the trade. Emilia and Luzia are as different as day and night. Beautiful Emília dreams of leaving the small provincial town, reads the fashion/beauty magazine, and designs her own clothing (often to the ridicule of the town's residents. Tall, independent Luzia, with a damaged arm from a childhood accident, has never let it stop her from becoming a confident seamstress. She too has dreams even though she knows her damaged arm prevents her from becoming a viable marriageable interest.

The two sister's paths separate though when a group of cangaceiros (bandits), led by the infamous Hawk, converge on the town and take Luzia with them. Emília finds her escape through a hasty marriage to a wealthy doctor's son and moves to the city of Recife. Luzia becomes a well-known cangaceiro nicknamed The Seamstress and Emília becomes a wealthy socialite. However, girlhood dreams are never the same in reality. Emília has to hid her past and association with Luzia and must deal with high society prejudices and a distant husband with a secret. Luzia finds that every day life as a cangaceiro is not as thrilling as one might think. Communication between the sisters is non-existent and the two rely on clipping newspaper stories to keep in touch.

The novel alternates between each sister's viewpoint. At the beginning I loved Luzia's voice and was always impatient to get through Emília's side to get back to Luzia. I just related more to Luzia over Emília's fashionable frippery. But as the story progressed, I fell for Emília's plight and just loved how she evolved. I have to say it did remind me of Isabel Allende but Frances de Pontes Peebles has a voice all her own. It is just vivid and beautiful. Be aware that while the Hawk's group of cangaceiro's often seem like Brazil's Robin Hood or Zorro...there are gruesome atrocities committed as well.

I LOVED this book. I couldn't put it down. I loved Luzia. I love the scenes between Luzia and the Hawk. And Emília evolution from a selfish materialistic girl into the woman in Recife is just beautiful and often heart wrenching to read. Frances de Pontes Peebles depicted the Brazilian landscape and scenes so well that I almost felt like I was watching it. I can still picture in my mind the newspaper clipping and photo depicting the elusive Hawk and Seamstress' band of cangaceiros. The history of the Brazilian land and people is fascinating and I loved finding a book that depicted this unfamiliar time period.

I also stumbled across Frances de Pontes Peebles blog The Art of Waiting and I am addicted. You should check it out. There's an section at the end of the paperback copy that I have which has an interview with Frances regarding her research and travels while writing The Seamstress. She actually went into the remote regions and talked with people in the very places she was writing about. No wonder the imagery is so vivid! And Frances' own ancestral history also takes a part in this story. I want her to write a whole other book/memoir depicting her adventures in writing and researching this book.

Here's an alternate cover. I can't tell which one I like best...they are both beautiful: And I'm a sucker for stories about sisters because I too have a great sister. So I thought I'd include an old photo of us dressed up as cangaceiros. I think I was twelve or so at the time and it was taken at the lovely Casa Bonita in Denver (if you've never been...go!...and take your kids if you have any). 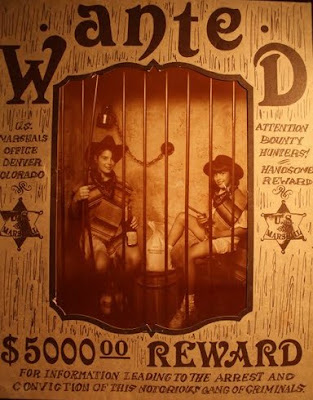