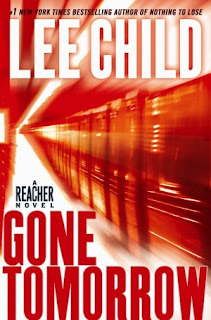 All I have to say is that sometimes book promotions work. Very well. I get Random House's eNewsletter and they had an excerpt of the first chapter or so of Lee Child's latest Reacher Novel #13, Gone Tomorrow. Like the sucker that I am, I read it and was hooked. I posted the first sentence on my Friday Firsts posts last week.

First off, I must tell you I've never read a Lee Child novel and obviously have never read the first twelve Reacher books. That said, I don't think it makes a big difference if you had. It's like jumping into a Bond movie...you don't really have to have watched the first ones.

Jack Reacher is ex-military. He really lives nowhere. He has no luggage, no change of clothes. He's kind of substance living in the city...a.k.a. cheap hotel rooms and just living day to day. (Really, he is an interesting character. Makes me want to read the first book in the series.)

Anyway, here's Jack sitting on the 6 train heading uptown in the early early morning. Five people are on the train car with him and one is probably a terrorist. He then proceeds to break down the signs of what a terrorist looks and acts like. And she (it's a she) fits the bill to a T.

And that's what hooked me. It was really fascinating. And what kept me interested in the story was Jack's continuous snarky observations of New York and its people. Sometimes they cracked me up and usually I was like "YES!" that is totally what it's like. For instance, as he's scrambling to get away from (or follow someone, I forget), he gets bogged down by one of NYC's many Double Wide baby strollers for twins, triplets, etc. And I was like "YES! Have you ever been to the Upper West on a Saturday morning?!" And apparently he has.

So it was a good action book with a odd snarky lead character and it was fun. And he made fun of tidbits of NYC life which made me laugh.

Have you read any of the Reacher books?