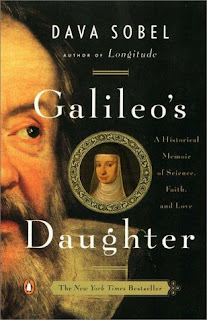 My sister and one of my friends are in a little book club together. We are trying to get more members to join but it's all online since my sister is in Alaska, my friend is in Tennessee, and I am in New York. But so far it's been pretty fun. I've read books I would have never have thought of reading on my own. So far we've all taken turns picking the book and this time it was my sister's pick. So this month's pick was Galileo's Daughter: A Historical Memoir of Science, Faith, and Love by Dava Sobel.

I have to say that this was such an interesting read. Galileo had three children whom the eldest daughter he was very close to. His eldest daughter, Victoria, and her younger sister both became nuns. Many of the letters Victoria wrote to Galileo survive and are included in the book. Also included are snippets of Galileo's publication and letters to others. While Galileo Galilei lived from 1564 to 1642, the time frame of the book is roughly a bit before Victoria's birth in 1600 until Galileo's death.

If you don't know much about Galileo, he was a prominent scientist during his time. He improved upon the telescope and could see plants and phenomenon that no one had ever seen before. He made discoveries in astronomy, physics, and geometry. He was also a devout Catholic and a thoughtful father. What is commonly known is that he was a proponent of the Copernican system of our solar system....that the earth and other planets revolved around the sun. During his time it was believed that the earth, according to what was interpreted in the Bible, stood still and the sun and planets revolved around the earth. Galileo's discoveries led him to believe otherwise. This made him highly unpopular with some Catholics including the Pope.

It is such a great book interspersed with pictures and translated letters from Victoria to Galileo. Unfortunately because of Galileo's unpopularity with the Pope, the letters Victoria (or Sister Maria Celeste....I love that she took on a "celestial" name) kept from Galileo were probably destroyed. And if you read it, make sure you read up to the last chapter because that last chapter is a must-read.

The only drawbacks to the book is that during the beginning I thought it was a little jumpy from paragraph to paragraph sometimes. This could also just be that memoirs are sometimes hard to write when there is a lack of filler information. I'm also not really familiar with the geography of Italy even though I have visited the country before. It would have been handy if a map was included in the book. Also, the plethora of character involved made me wish there was a little dictionary of people in the back of the book so I wouldn't get confused on who is who. Other than that, what a great read.

While the book does a great job describing the accomplishments and discoveries of Galileo, it is also a wonderful tribute to the relationship between a father and daughter.

Oh, and don't you think Galileo's daughter looks a bit like Barbara Streisand? Or is it just me? 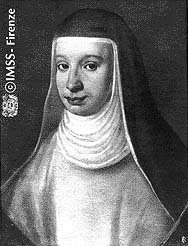 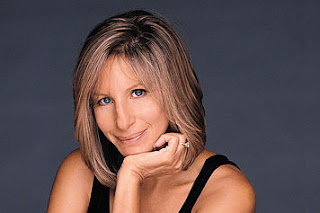 Also Reviewed by Heather at Age 30 - A Year of Books