The Language of Trees - Ilie Ruby 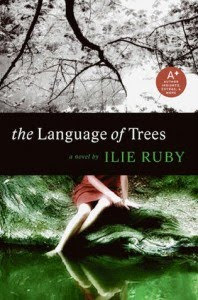 Book: The Language of Trees
Author: Ilie Ruby
Paperback: 368 pages
Publisher: Avon A (July 20, 2010)
A while back I saw Ilie Ruby's novel The Language of Trees on Shelf Awareness and requested an ARC to read and review.  I think the main reason was because of it's gorgeous cover but also because it takes place in the Fingerlakes region of New York and involves Native American themes.  I thought it was a beautiful novel with touches of a mystery and romance with a supernatural twist.
Here's the synopsis:
Grant Shongo is part Seneca and has returned to his home town by Canandaigua Lake.  He's running away from a failed marriage and needs some time to repair his life.  By chance, he runs into his high school sweetheart, Echo, who's also come home to check on her adopted father, Joseph, who's health is ailing.  However, Joseph has other things on his mind.  Local town legend, Melanie Ellis, a young mother, has gone missing.
Twelve years earlier, Melanie Ellis was just a young girl when she took her young brother and sister, Maya and Luke, on a midnight canoe trip, through the pouring rain to Squaw Island.  No one knows what happened but after the storm subsided, Luke was gone.  Now Luke's spirit is haunting certain members of Canandiagua and long buried secrets will have to be resurrected.
I hope that made some kind of sense as I usually like writing my own synopsis.  For the most part, I liked this book.  The way Ilie Ruby made the Fingerlakes area come alive was beautiful.  For instance, this blurb by author unknown at the beginning of the book is a running theme to the whole story:
Trees are the most trusting of all living creatures because they trust enough to put their roots down in one place, knowing they'll be there for life.
Ilie Ruby made all the characters multi-dimensional and I loved that not all problems were resolved at the end.  The story wasn't just narrated by Grant and Echo, but by almost all of the characters involved in the story.  It was a beautiful and sad story: bittersweet.  While I enjoyed the supernatural touches, it wasn't overly supernatural to make it unbelievable.  The only problem I had with it was sometimes it got a little over descriptive which can make me skim a bit too much.  But that might just be my problem, not the author's.
I noticed a review over at TLC Book Tours which states that it's a "healing tale of redemption" (Elizabet Rosner) which describes it exactly.
I was going to find photos of Canandaigua Lake on Google Images but found that Ilie Ruby has a section on her website of photos of the area.  So go over there and check it out.