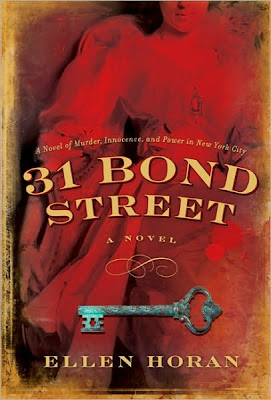 Awhile back I was asked to join the TLC Book Tour for 31 Bond Street by Ellen Horan: A Novel of Murder, Innocence, and Power in New York City.  I love historical fiction and I have a specific fondness for the 19th Century so I thought why not?  I'm not sure if it's was because recently I've been Netflixing the series Bones (forensic anthropology helps solve murders) or what, but I totally absorbed this book in just a couple of days.

The setting is 1857 in New York City.  A real crime happened: a dentist, Dr. Burdell, was found gruesomely murdered in his home. The main suspect is a young widowed lady, Emma Cunningham, with a couple of daughters who lives with him (as a tenant) and claims to be his wife.  Suspicion is out whether or not they were married and if she murdered him.  A brilliant defense attorney, Henry Clinton, puts his career at stake defending her of this crime.

I thought this story was absolutely fascinating.  The story is told from various perspectives, mainly flipping from Henry Clinton's point of view as the trial proceeds, to Emma Cunnigham's view as she meets the Dr. Burdell and the events leading up to his death.  Sometimes I can figure out in a crime book who the culprit is, but in this case I had absolutely no clue.  Since this was a real life murder, I also refrained from looking it up on Wikipedia as I sometimes end up doing.  I know Ellen Horan had to employ creative license while writing the fictional parts but I thought she did a fabulous job doing a "what if" to this real life crime story.

I just have to mention that I loved the book's setting in NewYork City.  In her acknowledgements and explanations at the end of the book, she mentions that New York City was definitely a character in the book.  I loved seeing the city from this historic perspective - before the high rises, before the Civil War and abolition of slavery, and before women's rights.  Even the forensics I thought was interesting, like how they knew back then it had to be a left handed person.  I especially thought it was bizarre when they mentioned the crime scene was painted, not photographed.  This was before photography was used in a crime scene.  I just thought she did a wonderful job bringing this era and old New York City to life.

I visited the website for 31 Bond Street and found this cool book trailer: 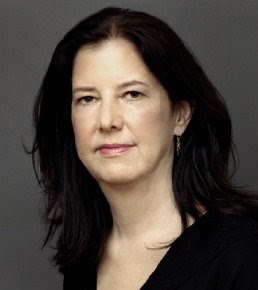 Ellen Horan previously worked as a freelance photo editor for magazines and books in New York City.  She has a background in painting and visual art.  31 Bond Street is her first novel.