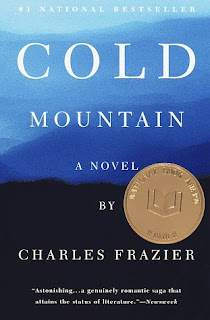 Before I write this review, I have to state that Charles Frazier's second novel, Thirteen Moons, is one of my favorite books. I just love it. That said, I had pretty high expectations of Cold Mountain. Well, that and I had already seen the movie a while back and to be honest, it just kind of confused me.

Four years after he left to join the war, Inman is hospitalized with an injury. Knowing the South is losing the war and knowing he may be killed for desertion, Inman decides to go home to Cold Mountain and to Ada, his sweetheart he left behind.

Back home at Cold Mountain, Ada's father, the local pastor, has passed away. Originally from the city, Ada is unprepared to fend for herself and her farm without help. Enter Ruby, the feisty girl who teaches Ada how to survive and work the land.

I loved that this was a Civil War era novel with a slightly different perspective. Granted, the only Civil War novels I've read are The Killer Angels and Gods and Generals , but this novel wasn't about the fighting, the war, or which side was in the wrong. It is about people. People trying to survive and find a place in a country that was rapidly changing.

I loved that he interspersed a bit of Native American folklore and history into a bit of the story. He does it a lot more in Thirteen Moons but it works well here. One of my ancestors walked the Trail of Tears and it provided such an interesting glimpse into a country where all the native peoples were rounded up and forced to leave. It's mind boggling the atrocities that have happened in the past.

I loved that it showed that the war was felt not just on the battle fields but all over the country. The war gave quite a bit of unscrupulous people the excuse to rob and terrorize innocent people.
There's a movie with Toby Maguire and Jewel called Ride with the Devil that shows this as well. It's something, I think, that is overlooked a lot in the history books.

And I love how it feels like a modern Odyssey re-telling. I was talking to a friend about the movie, before I read the book, about how the story is like the Odyssey, with Inman just trying to get home to Ada and all the trials and tribulations he goes through. And at one point in the book, Ada and Ruby are reading the Odyssey which I think was pretty interesting.

I never really connected with Ada. I appreciate the changes her character goes through but I never really sympathized with her. Not like I did with Ruby and Inman.

And the book was really slow going with me. I'm not sure why. The writing is beautiful and the story was pretty good but if I hadn't wanted to know how it ended, I may have not finished the book.

I am going to have to go back and re-watch the movie now.

From the movie, here's Ada and Inman: 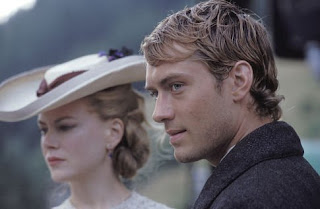 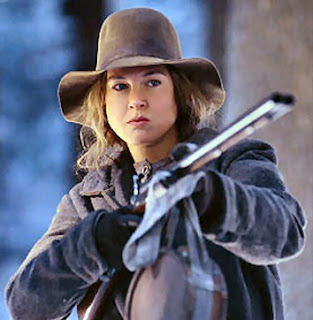 **Have you seen the movie and/or read the book? What did you think?
**Are there any Civil War books or movies you like?
UPDATE:
Lisa from Books Lists Life reminded me that Gone With the Wind is a great Civil War story. I love both the book and movie. Which reminded me of this poster for Cold Mountain. Doesn't it seem very Gone With the Wind-ish to you? 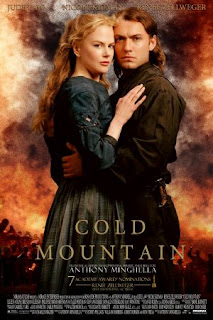